Policy Brief #12, July 2016. Population aging is a major force reshaping economies and societies. New characteristic-based measures, developed at IIASA, provide a more accurate assessment of the challenges of population aging and the effects of policies to overcome them. 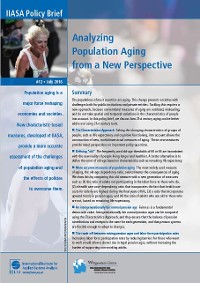 The populations of most countries are aging. This change presents societies with challenges both for public institutions and private entities. Tackling this requires a new approach, because conventional measures of aging are outdated, misleading, and do not take spatial and temporal variations in the characteristics of people into account. In this policy brief, we discuss how 21st century aging can be better addressed using 21st century tools.

The Characteristics Approach Taking the changing characteristics of groups of people, such as life expectancy and cognitive functioning, into account allows the construction of new, multidimensional measures of aging. These new measures provide novel perspectives on important policy questions.

Defining "old" The frequently used old-age threshold of 60 or 65 are inconsistent with the new reality of people living longer and healthier. A better alternative is to define the onset of old age based on the characteristics such as remaining life expectancy.

More accurate measures of population aging The most widely used measure of aging, the old-age dependency ratio, overestimates the consequences of aging. We show this by comparing this old measure with a new generation of measures such as (1) the ratio of adults not participating in the labor force to those who do, (2) a health care cost-dependency ratio that incorporates the fact that health care costs for elderly are highest during the final years of life, (3) a ratio that incorporates upward trends in pension ages, and (4) the ratio of adults who are old to those how are not, based on remaining life expectancy.