Expanding access to household electricity services accounts for only a small portion of total emission growth, shows a new study from the International Institute for Applied Systems Analysis (IIASA), shedding light on an ongoing debate on potential conflicts between climate and development. 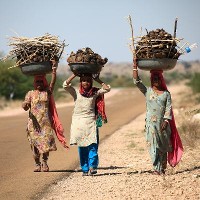 Improving household electricity access in India over the last 30 years contributed only marginally to the nation’s total carbon emissions growth during that time, according to a new study published in the journal Nature Climate Change.

“Energy access is fundamental to development: it brings improvements to all aspects of life, including education, communication, and health,” says IIASA researcher Shonali Pachauri, who conducted the study.

While increased energy access is widely agreed to be an important goal for development efforts, such as the UN Sustainable Energy for All Initiative, the climate impacts of increased access to electricity have been unclear. The new study is the first to examine the impact of electricity access on carbon dioxide emissions using two sources of retrospective data.

“This study shows that the climate impacts of expanding access are in fact very small,” says Pachauri. However, she adds, expanding low-carbon energy technologies in developing countries would bring many co-benefits beyond climate mitigation.

Pachauri used India as a case study because while the country still lacks electricity access for much of its population—around 400 million people—it has vastly increased access in the last 30 years. From 1981 to 2011, household electricity access in the country improved from around 25% to between 67-74% of the population, an increase of approximately 650 million people.

Using two data sources, the study found that improved electricity access in India from 1981 to 2011 accounted for approximately 50 million tons of CO2, or 3-4% of the rise in total national CO2 emissions.

Since electrification also tends to lead to increased wealth and participation in the economy, it can also lead to additional increases in emissions from indirect energy use through consumption. Pachauri found that when she took these factors into account, household electricity use would account for 156 to 363 million tons CO2, or 11 to 25% of emissions growth in the country. However, even with increased electricity use, Indian households still use less electricity than Chinese households, and less than 10% of households in the United States. 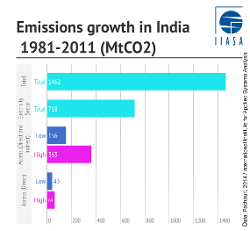 Emissions growth in India from 1981 to 2011, from different sources.

Researchers say that even though the emissions growth from expanded energy access is small, low carbon energy sources have additional benefits for developing countries and should be encouraged. Previous IIASA research including the 2012 Global Energy Assessment has shown a broad array of co-benefits from expanding low-carbon, sustainable energy technologies.

Pachauri says, “Low-carbon energy sources bring improved health, efficiency, and can also bring benefits to the economy and employment. And if international climate policies are introduced later, more investment in low-carbon energy sources would mean that developing countries are not locked-in to fossil fuel power and higher costs in the future.”

Narasimha Rao: Poverty eradication and climate change: Is there a conflict?