The issue of charging infrastructure requirements is lately a major question in the context of urban energy planning for transport electrification. As electric vehicles are gaining momentum, the issue of locating and securing the availability, efficiency and effectiveness of charging infrastructure becomes a complex question that needs to be answered. Such questions are addressed by the BeWhere-bus model with a focus that is sector-oriented to public transport and currently applied to the bus network of Stockholm, Sweden.

The BeWhere model developed at ESM was adapted and used for optimizing the distribution of charging infrastructure for electric buses in the city, taking into account current fuel alternatives (i.e., biodiesel, biogas).The analogy and necessity to adapt the model in this way is evident, since biofuels and electricity are both promoted for reducing the environmental impact of transport. Geospatial analysis in ArcGIS, input data management using Python and cost, emissions and energy minimization in GAMS, the model optimizes the locations of electric charging stations of 143 bus lines and 403 existing bus stops that are potentially suitable for electrification in Stockholm’s public bus network. 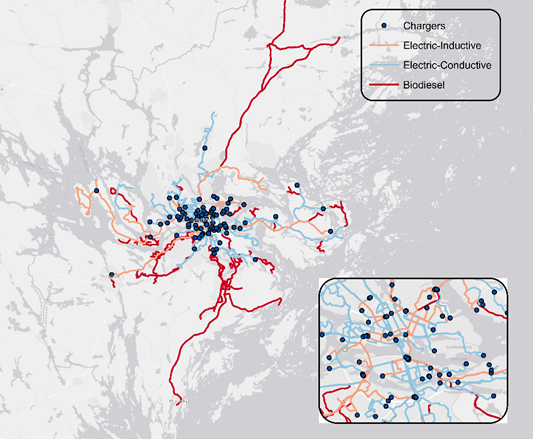 Results from the BeWhere-bus model presenting the bus lines and stations selected for electrification.

The results from the cost optimization show that 41 conductive charging stations could electrify 42 bus lines, while the rest 101 bus lines use biodiesel (see figure). In the case of an energy optimization, the amount of lines operating on electricity increases (102 bus lines), while 108 conductive and 29 inductive charging stations are installed. The major public bus transport hubs connecting to the train and subway system show the highest concentration of installed charging stations. Biogas is not chosen by the model, due to its lower fuel efficiency and higher costs compared to the available alternatives. The model estimates also investment costs as well as emissions avoided for the city.

The model is highly adaptable for various city contexts and can promptly assist in a straightforward way the transition to fossil-free bus transport. The total costs for the operation of a partially electrified bus system in cost and energy optimization scenarios marginally differ from the costs that a 100% biodiesel system would have, therefore confirming that the lower operational costs and fuel prices for electric buses can balance the high investment costs for charging infrastructure.

A short description of the basics of the BeWhere-bus model.

Some articles in the press 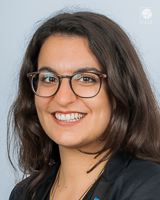 Shaping the future of public transport