IIASA population projections and results from the ERC-supported Re-Aging project are used in a new World Bank report on population aging in Europe and Central Asia. 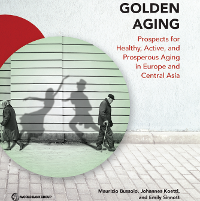 The report examines demographic trends that lead to population aging and related economic challenges and opportunities. It suggests that if policymakers facilitate behavioral adaptation to the emerging trends Europe and Central Asia could one day enter a period of “Golden Aging,” in which all people can live long, healthy, active, and prosperous lives.

The new report was launched in Vienna on 17 June 2015 by World Bank officials and Hans Jörg Schelling, Austria's Minister of Finance. World Population Deputy Program Director Sergei Scherbov participated as a panel member at this event together with World Bank Group Chief Economist of the Europe and Central Asia Region Hans Timmer, OECD Senior Economist Hervé Boulhol, and Austrian Federal Ministry of Finance Deputy Head Peter Bart. The event was live streamed and can be watched on the World Bank website.

In its definition of aging, the report refers to the work of IIASA researchers Warren Sanderson and Sergei Scherbov, who argue that if new measures of aging are applied that take into account increasing lifespans and declining disability rates, many populations are aging more slowly compared to what is predicted using conventional measures based purely on chronological age.

To reflect the burden of disease and disability in measurements of the share of the dependent population, Sanderson and Scherbov introduced the adult disability dependency ratio (ADDR). When aging is measured based on the ratio of those who need care to those who can give care, the speed of aging is reduced by four-fifths compared to the conventional old-age dependency ratio.

For the country analysis, IIASA population data and projections are used throughout the report. The demographic projections produced by IIASA in collaboration with the other partners in the Wittgenstein Centre for Demography and Global Human Capital (the Austrian Academy of Sciences and the WU-Vienna) are unique in that they project the number of people in all countries in the world by age, sex and six levels of educational attainment. The full projection results were published in a massive volume of 1056 pages by Oxford University Press, edited by Wolfgang Lutz, William P. Butz and Samir KC in 2014.

For more information on the report, visit the World Bank website.