The updated Aging Demographic Data Sheet comprehensively presents new measures of aging, developed at IIASA, for all countries in the world and world regions. 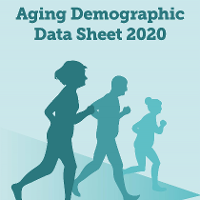 Population aging challenges the ability of societies to adapt. Responding appropriately has been hampered by inaccurate and misleading traditional measures of aging. The main problem with them is that they do not capture the changing characteristics and capabilities of people. Today, 60 or 65 year-olds are very different from their counterparts half a century earlier and are likely to be very different from what they will be like half a century in the future. In any year, people are also different geographically and across population subgroups. Older people today are generally fitter and healthier than ever before and live longer. The new measures in this Data Sheet take account of the diversity of populations.

In this Data Sheet, we present measures of population aging adjusted for changes in remaining life expectancy and compare them to unadjusted measures. Unadjusted measures of population aging often assume that old-age begins at age 60 or 65. We define that stage of old-age as beginning at the age when remaining life expectancy falls to 15 years. The result is a dynamic old-age threshold that reflects variations in demographic conditions. In this Data Sheet, we show that when aging is measured using the new threshold, much slower speeds of aging are observed than when unadjusted figures are used.

We can also see that the proportion of the adult lifespan spent in old-age tends to decrease over time when the dynamic old-age threshold is used. Without adjusting for changes in remaining life expectancy the opposite is observed Since 2017, the new measures of population aging are a permanent feature in UN reports on aging. These measures provide policy makers all over the world with a clearer understanding of how population aging has occurred in their countries in the past and how it is likely to evolve in the future. Through the UN, some of our measures of population aging are now easily available for virtually all countries of the world. This Data Sheet presents additional measures not found there. The datasheet features ranking and graphs, and contains a detailed glossary.

The work on the data sheet was led by World Population Deputy Program Director Sergei Scherbov, expert in this fields of demographic modelling, population projections, data processing and presentation, and measuring aging. For many years Scherbov and Warren Sanderson have developed new measures of age and aging in demographic research. Their groundbreaking research has been published in major scientific journals, including Nature and Science, and have been included in the UN report on aging. A complete description of their approach to the study of population aging appears in a new book titled "Prospective Longevity: A New Vision of Population Aging" published by Harvard University Press (2019).

The data sheet was developed in the framework of the Ageing Trajectories of Health: Longitudinal Opportunities and Synergies (ATHLOS) project at IIASA, funded by European Union’s Horizon 2020 research and innovation program under grant agreement No 635316.