A new book by IIASA World Population Program researchers offers an opportunity to rethink how we define and measure aging to inform better policies for future societal and economic health. 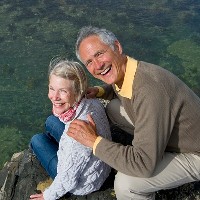 Population aging is a complex, multidimensional phenomenon. Unfortunately, the most commonly used measures of population aging are often distorted, which has meant that most discussions on the topic have been based on unreliable data. This is of course not a good basis for the formulation of appropriate public policies related to issues like health in old age, the burden of old-age dependency, and equitable intergenerational pensions.

In their seminal book titled Prospective longevity: A new vision of population aging, IIASA World Population Program researchers Warren Sanderson and Sergei Scherbov aim to extend the current view of population aging by showing how we can generate better demographic estimates to inform better policies. They provide a new way to measure population aging and show that aging can be measured not only using how many years we have lived, but also through other characteristics, such as the number of years we have left to live, our disabilities, and our cognitive abilities. Their analysis allows for a more precise quantification of the extent of aging, and reveals new aspects that were previously not observed. Today’s 65-year-olds, for example, have different characteristics from those who were born earlier, and tomorrow’s 65-year-olds will likely also be different from today’s in ways that are pertinent to the study of population aging.

“Most fundamentally, our idea is to minimize the role of chronological age in the study of population aging. How functional people are depends on what they can do and on their health, not how many years they have lived. In our research we deal with measuring population aging, including reinterpreting its history and likely future. We discuss aging and public pensions, as well as questions about whether population aging will be faster or slower as life expectancy increase speeds up, along with a host of other interesting questions,” explains Sanderson.

The authors have been working together on the topic of population aging for over a decade and have developed a new paradigm in conceptualizing population aging – the Characteristics Approach – as part of the Reassessing Aging from a Population Perspective (Re-Aging) project funded by the European Research Council. The hallmark of the approach is the consistent use of changing characteristics of people. The approach has strong implications for both research and policy and is already being used by the UN. The UK Office of National Statistics has also produced an important report using the authors’ research as part of an innovative analysis of health.

“Correct measures distinguish people's characteristics. These change over time and are very different in different countries. People age at different rates in different places and at different times. Aging is a multidimensional process and to measure it correctly we need to take those dimensions into account including health status, physical, and cognitive characteristics. If we do not do this, we mis-measure aging and this could lead to poor policies. We hope that our vision of age and aging as outlined in this book will lead to more comprehensive policies in all spheres related to aging. People have to understand that it’s not just that 40 is the new 30 anymore, but 60 is also the new 50,” Scherbov concludes.