25 years of Ukraine membership at IIASA

Options Winter 2018/19: The National Academy of Sciences of Ukraine joined IIASA as a National Member Organization in 1994. We look back on 25 years of fruitful collaboration. 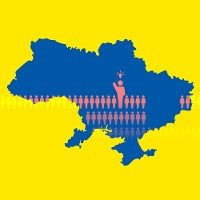 In 1994, Ukraine was at a turning point: the government was undergoing rapid change after declaring independence from the Soviet Union, and the country elected a new president and parliament. In the same year, the National Academy of Sciences of Ukraine (NASU) joined IIASA as a National Member Organization (NMO). With a commitment to systems analysis research, Ukraine embraced its transition to sustainable social, economic, and environmental betterment.

Move forward to 2018, when NASU is also celebrating its 100th anniversary, and there have been 25 years of productive collaborations between IIASA and Ukrainian systems analysts. Much of the IIASA-Ukraine relationship is owed to Borys Yevhenovych Paton, NASU president and Victor Mikhailovich Glushkov, director of the Institute of Cybernetics, who facilitated the creation of the Committee of Systems Analysis at NASU. They and their colleagues were key to the systems analysis focus at NASU, as well as the decision to join IIASA as an NMO.

Building economic growth and sustainability, together

The partnership between IIASA and NASU has benefitted from the contributions of Ukraine’s most promising scientists. Over the past quarter of a century, Ukrainian and IIASA researchers have worked together to study energy, water, land-use, socioeconomic systems, the sustainable revival of the agricultural industry, and the country’s dwindling forests. Such collaborations center around the adaptation of the institute’s advanced methods in systems analysis to identify long-lasting solutions to challenges that affect multiple sectors in Ukraine.

A current research project with NASU, “Integrated modeling of food, energy, and water management for sustainable social, economic, and environmental development”, incorporates the country’s specific management policies and IIASA global resource models. This allows both interregional and international trends to be factored into decisions about how to jointly handle resources, industry, and society. The project is a partnership between IIASA and seven leading institutes of NASU, collaborating with networks of national and international organizations, universities, advisors, and policymakers.

Other collaborations have tackled energy and disaster risk management. As the Ukrainian government develops a policy to increase its share of renewable energy to over 13% by 2030, IIASA has been working with the academy to develop models for energy systems planning. A model for catastrophic hazards combines natural, agricultural, financial, and socioeconomic systems in the face of financial and natural disasters like the recession of the late 2000s and the disastrous floods that cost the country more than US$800 million in 2008.

Collaboration however, goes beyond modeling into broad implementation. The ClimaEast project, which ran from 2012 to 2016, resulted in actionable recommendations for an adaptive sustainable forest management strategy in Ukraine, as detailed in IIASA policy brief #18. Likewise, the project “Reducing Greenhouse Gas (GHG) Emissions Uncertainties” that ran from 2010 to 2014, resulted in the first fully verified carbon account for Ukrainian forests from 1990 to 2010 and produced a 30-year forecast for use in decision-making on managing GHG emissions. Four Ukrainian researchers, who were former participants in the Young Scientists Summer Program (YSSP), received an award by decree of the Ukrainian president for achievements in science, for their book on the project. An extended analysis of the impacts of climate change on national forests was published by NASU and IIASA in 2018.

The people behind the research

Achievements like these, and scientific progress in general, are a collective effort, and the people responsible are equally worth celebrating alongside their projects.

Working with a team of IIASA and NASU collaborators including Paton and NASU Vice President Anatoly Zagorodny, IIASA researchers Yurii Ermoliev and Tatiana Ermolieva aimed to promote self-sufficiency in their home country with their research on integrated management techniques. The Ermolievs know that in the wake of financial and natural disaster, self-sufficiency means everything for a country as vulnerable and resilient as Ukraine.

“The country is extremely rich in land and sufficient mineral resources to cover domestic demand,” explains Ermolieva. “However, it is suffering from inconsistent and disintegrated policies that make it fully dependent on international help.” 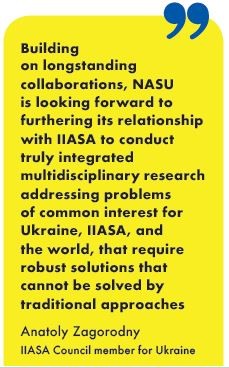 The legacy of collaborative research between IIASA and Ukraine connects researchers young and old as they become experts in their fields. In fact, some of Ukraine’s notable scientists and scientific leaders got their start in the YSSP program. This includes Oleksandra Borodina, who works at the Central Reform Office in Kiev, advising the Ministry of Regional Development, Construction, Housing and Communal Services, and Nikolay Royenko, who founded Miratech Company – a leading international IT company. Since 2008, 14 doctoral students from Ukraine have participated in the YSSP contributing to more than 200 publications.

IIASA’s latest Ukrainian YSSPer is Bohdana Dubrovets. Working in the Ecosystems Services and Management Program alongside previous Ukrainian YSSPers like Olha Danylo, Mykola Gusti, and Myroslava Lesiv, she assessed the ecosystem services of forests in Chernobyl for implementing sustainable forest management in radioactively contaminated territories. The support of friends and mentors brings Ukrainians at IIASA together in a tightly knit community.

“I wish every PhD student would experience this kind of mentorship,” says Danylo.

If science and education define a country, then Ukraine’s budding talent and strong scientific connections are a testament to its enormous potential as a country, even in the face of its challenges.

“More attention to science in Ukraine could unlock its economic potential,” says Anatoly Shvidenko, a forestry expert at IIASA. “The positive relationships between Ukrainian and European research institutions over the past decades will open many opportunities for science and education.”

Zagorodny, who is also the IIASA Council member for Ukraine and leads a major IIASA-NASU collaborative project, is making the most of abundant scientific opportunity.

According to Yuriy Kostyuchenko, from the Centre for Aerospace Research of the Earth at NASU, and the NMO secretary, the horizontal links between interdisciplinary programs and projects are sometimes even stronger than the vertical links within individual institutions.

POLICY BRIEF: Ensuring a sustainable future for forests: The case of Ukraine