In 2002 China became a member of IIASA through the National Natural Science Foundation of China (NSFC), launching an era of research collaborations involving universities, government bodies, and  the Chinese Academy of Sciences. 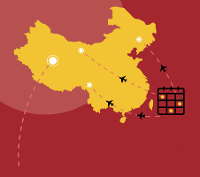 It is impossible to address global issues like climate change, sustainability, globalization, and governance without considering China. Now the world’s second largest economy by nominal GDP, the country is also the world’s largest exporter and second largest importer of goods. This “economic miracle” has occurred over just a few decades, bringing millions out of poverty. At the same time, China’s transformation to global superpower draws into sharp focus the limitations of natural resources, the consequences of pollution, and the sustainability of both regulatory and environmental systems. In short, The People’s Republic of China and the future of the planet are inextricably linked.

Over the past decade, China-IIASA collaborations have concentrated on reducing greenhouse gas emissions, developing sustainable agriculture, disaster preparedness, demography, and sustainable energy, reflecting global concerns as well as the country’s own domestic realities.

IIASA Council member for China and NSFC Vice President Xincheng Xie says IIASA is an important partner for researchers to study the models and tools developed by the institute and provide evidence- based science for China’s policy decision making. The relationship, says Xie, is mutually beneficial.

An example of such beneficial cooperation is Peking University’s (PKU) International Postdoctoral Fellowship Program in which fellows gain international and interdisciplinary research skills at both IIASA and PKU. Working on real-world problems and issues arising from China’s rapid economic growth, young scientists are sharpening their skills and increasing their knowledge. Further deepening the China-IIASA relationship is Beijing’s recent decision to adopt the Greenhouse Gas Air Pollution Interactions and Synergies (GAINS) model, which is an IIASA modeling framework used to simultaneously combat air pollution and climate change.

Of the many environmental issues China faces, the management of its coal burning power plants is among the most urgent. The problems are manifold and include curbing CO2 emissions to achieve government targets while simultaneously meeting energy needs and local environmental demands around air pollution and access to water. In their research project titled, Managing China’s Coal Power Plants to Meet Multiple Environmental Objectives, scientists including IIASA researcher Fabian Wagner, Wei Peng at Harvard University, and Haboi Zhai at Carnegie Mellon, addressed critical questions such as how China should manage its coal-dominated electricity system to address CO2, air pollution, and water conservation objectives. They also investigated how the coal power system would respond to more stringent environmental policies. Wagner says it was a case of dealing with trade-offs among competing objectives: “Systems analysis helped us to not only find a particular solution that minimizes these trade-offs or lies in a particular sweet spot, but also helped us to describe whole sets of solutions and thus offer a basis for discussion among stakeholders like the Chinese Provinces.”

The researchers were able to show that a reasonable parallel increase in air pollution tax and water price, in conjunction with an expansion of renewable energies, would result in a reduction of pollution and water stress levels, as well as a reduction in the perceived level of regional trade-offs. According to Wagner, their work provides practical help in getting such policies underway. 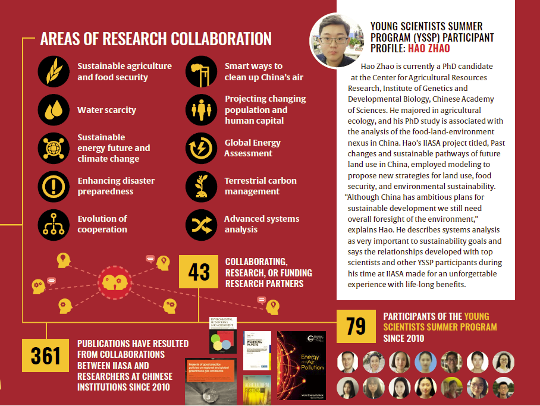 In China’s Chongqing municipality, IIASA researchers working with colleagues from Chinese scientific institutions have addressed one of the most pressing global priorities: breaking the link between economic growth and environmental damage. In their paper, IIASA researchers Wenji Zhou and Bing Zhu, along with Yadong Yu from the East China University of Science and Technology, Li Zhou from Tsinghua University, and others explain how Chonqing (one of China’s major cities) has managed substantial decoupling of environmental pressure from economic growth.

Their findings included that technological change was the dominant driver of decoupling, making significant contributions to reductions in emissions, soot, wastewater, and solid waste. “Importantly, we show that you don’t have to contribute more to carbon-based emissions in order to undergo economic growth on a city level,” says Zhu.

China, IIASA, and a sustainable future?

In a world of diminishing resources and rising demands for global action on climate change, China’s future development will be pivotal. Will IIASA continue to play an important role in this development? Xincheng Xie points to the institute’s excellence in energy, climate change, and population studies, but says China is hoping for more substantial cooperation in the future to achieve what he describes as a “sustainable and lasting relationship”.

Gender in the transition to energy for all: From evidence to inclusive policies