An infinite number of futures

Options Magazine Winter 2016: Scientists at IIASA helped create a new toolbox for researchers to explore how humanity will respond and adapt to climate change—and potentially provide insight into sustainable development. 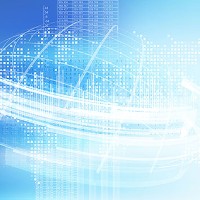 “A resurgent nationalism, concerns about competitiveness and security, and regional conflicts push countries to increasingly focus on domestic or, at most, regional issues. Policies shift over time to become increasingly oriented toward national and regional security issues. Countries focus on achieving energy and food security goals within their own regions at the expense of broader-based development. Investments in education and technological development decline. Economic development is slow, consumption is material-intensive, and inequalities persist or worsen over time. Population growth is low in industrialized and high in developing countries. A low international priority for addressing environmental concerns leads to strong environmental degradation in some regions.”

This frightening vision is not a story from the latest dystopian science fiction literature. In fact, this description—and a more extensive version that comes with a wealth of quantitative data—is the result of a long scientific process involving dozens of scientists worldwide. It is the summary narrative of SSP3, one of the five Shared Socioeconomic Pathways (SSPs). The SSPs are a set of descriptive and quantitative pathways designed for climate change research that span a wide range of feasible future developments in areas such as population, the economy, and agriculture.

While SSP3 is a scary, conflict-driven world, the other SSPs describe a variety of other potential future worlds that, for example, shift more rapidly towards sustainability (SSP1), suffer from increasing inequality (SSP4), see rapid growth in the economy as well as fossil fuel use (SSP5), or follow a middle-of-the-road scenario (SSP2) which takes elements from the other four. In addition to the narratives, the SSPs contain quantitative data for socioeconomic factors such as population growth, land-use change, and economic development.

The SSPs are now fully operational and the data are available freely on the IIASA website. The development process resulted in two journal special issues. One, published in the journal Climatic Change in 2015, described the conceptual framework. A second, published in Global Environmental Change provides the quantitative framework for the scenarios.

“There are actually an infinite number of pathways that the future could take,” explains IIASA Energy Program Director Keywan Riahi, one of the leaders of the SSP development, a multi-year process that involved an interdisciplinary group of international researchers. “What the SSPs do is organize these into representative pathways, which researchers from many fields can draw upon in order to make consistent assumptions in their research.”

The SSPs provide a common basis for climate modeling, impact, and policy response studies and allow researchers to incorporate variables related to the human factors in climate change. These factors could spell the difference between humanity’s ability to slow or stop the rise in greenhouse gases that is driving climate change, and play a major role in how well people will be able to adapt to the climate change that does occur. But in the past, climate research has had trouble accounting for these human factors, with many models relying on simple assumptions, which likely did not match those made in other studies.

Brian O’Neill, a researcher at the National Center for Atmospheric Research, led the development of the SSP narratives. He says, “The reason that we needed the SSPs is that for most questions about climate change, the answer is generally, ‘It depends.’ Usually it depends on two things: how much the climate will change, and the societal conditions. So in order to do research on climate change futures we need to look at futures in which we get a lot of climate change or not as much, and also alternative futures for how society might turn out.”

In the lead-up to the latest Intergovernmental Panel on Climate Change (IPCC) report, researchers had begun turning their focus from the physical science of climate change to how climate change will impact people, what makes people vulnerable to climate change, and how they can adapt to it. O’Neill says, “A world that has a lot of people in poverty, is not that well educated, has health systems that don’t work well, has poor governance, that’s a world where climate change impacts are going to be a lot more serious than one in which everyone is well-educated, institutions function well, and health systems work.”

How to make an SSP

Researchers sometimes describe scenarios as “stories about the future.” But they are quick to point out that the SSPs are not fairy tales. O’Neill says, “The basic distinction is that these are stories that are grounded in scholarship on different aspects of society. They are based on our understanding of how elements of society work, and how they relate to each other—elements like economics, demography, urbanization, governance, and education. The goal here is to develop plausible alternative stories about future development pathways.” 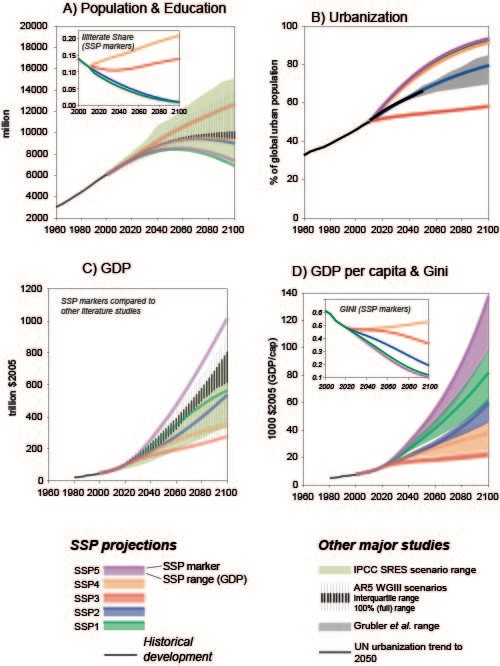 DIGGING INTO THE DATA The SSPs each include projections for a variety of socioeconomic factors, such as population and education, urbanization, and economic development. These factors are vital for projections of greenhouse gas emissions—indeed, research shows that in some of the SSPs, the world would not be able to achieve climate targets no matter how hard we try.

After the narratives were defined, researchers turned to numbers. Through an iterative process, groups of researchers collaborated to produce quantitative projections for a number of variables that fit each of the five SSP narratives. The process started with population projections, which were led by IIASA researchers Samir KC and Wolfgang Lutz.

“Population came first because it is needed as a multiplier to calculate demand in the future, for example to calculate how much energy will be required, how much water, and many other things,” says KC. “At the same time when there are adverse effects of climate change, the population determines how many people are impacted as well as who and where. For example the air pollution group would need population to see how air pollution will affect the population.”

While previous scenarios had included population projections, demographers argued that factors like age, sex, and especially education levels are essential for understanding climate change vulnerability and adaptation, and needed to be included in the quantitative projections. KC explains, “Having a more educated population has effects on many other socioeconomic measures. For example, more educated societies have a higher level of productivity. And in societies where there are more highly educated people, technological advancement is faster.”

Greenhouse gas emission scenarios were another area where IIASA experts provided major input. IIASA experts from the Energy and Ecosystems Services and Management programs worked together to develop an integrated set of energy and land-use emissions scenarios, which account for greenhouse gas emissions not just from energy usage, but also from the conversion of forest and grasslands into agricultural lands.

“This is important because land-use related activities including agriculture or forestry are among those most directly impacted by climate change. What happens in these sectors directly influences how resilient the sector is to climate change," says IIASA researcher Petr Havlík, who led the land-use side of the projections, working closely with Riahi and colleagues in the IIASA Energy program. “On the mitigation side, the land-use sector represents 25% or more of the total anthropogenic emissions. How these emissions develop across the different scenarios can change the challenge of mitigation quite substantially.”

Other variables calculated for the SSPs included projections of urbanization and energy, and the narratives included trends for other variables. Health, for instance, is one area where researchers expect major impacts from climate change, including rising levels of malaria, diarrheal disease, and undernutrition, depending on the magnitude and pattern of changes in vulnerability and weather patterns. Kristie Ebi, a researcher at the University of Washington, USA, and cochair of the international committee overseeing SSP development, says, “The five SSPs describe development pathways that will lead to different degrees of vulnerability and burdens of climate-sensitive health outcomes, before considering climate change. For example, SSP1 depicts a world where population health improves significantly, with increased emphasis on enhancing public health and health care functions that, in turn, increase the capacity to prepare for, respond to, cope with, and recover from climate-related health risks, before considering any impacts of climate change.”

The future of the SSPs

With the SSPs now published, the scenarios are already in widespread use. At a 2015 meeting at IIASA, researchers presented the scenarios to the wider climate community, who are beginning to work on the next IPCC report, the Sixth Assessment Report 6 (AR6). Riahi says, “We expect that the SSPs will shape climate research in major ways in the next few years, starting with their use for the next generation of climate projections in AR6.”

What will be the next step in SSP development? O’Neill says, “From the beginning the idea was that the SSPs should evolve as necessary and adapt to changes in the research agenda or changes with experience in using them.”

One idea is to take the SSP scenarios, which were designed at a global level, and scale them down so they can be used for policy making at the national and local levels. IIASA researcher Amanda Palazzo is currently working on a set of food security scenarios for West Africa, where climate change is projected to have major impacts on both crop yields and grasslands. Other researchers are working to improve the representation of inequality, developing data on income inequality within countries, which was not included in the original SSP data.

Havlík says “The narrative, the storyline, of the scenarios is always much richer than what a model or even a set of models can properly take into account at a given point of time. So I think that one of the key future developments will be to try to improve the representation of the narratives in the models and bring more detail into the scenario results.”

The SSPs were developed in order to aid in climate research, but researchers say they may prove useful also for other areas, such as biodiversity or for achieving the Sustainable Development Goals. Havlík says, “Other groups could certainly benefit from these scenarios and build on them. I think that this is kind of a first dimension—we would like to see these scenarios also taken up by initiatives which are not directly focused on climate.”

Nakicenovic N, Lempert R, and Janetos A (eds) (2014). A Framework for the Development of New Socioeconomic Scenarios for Climate Change Research. Climatic Change. 122(3)