Uncovering how grasslands changed our climate

Grasslands are managed worldwide to support livestock production, while remaining natural or semi-natural ones provide critical services that contribute to the wellbeing of both people and the planet. Human activities are however causing grasslands to become a source of greenhouse gas emissions rather than a carbon sink. A new study uncovered how grasslands used by humans have changed our climate over the last centuries. 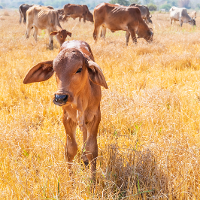 Grasslands are the most extensive terrestrial biome on Earth and are critically important for animal forage, biodiversity, and ecosystem services. They absorb and release carbon dioxide (CO2), and emit methane (CH4) from grazing livestock and nitrous oxide (N2O) from soils, especially when manure or mineral fertilizers are introduced. Little is known, however, about how the fluxes of these three greenhouse gases from managed and natural grasslands worldwide have contributed to climate change in the past, and about the role of managed pastures versus natural or very sparsely grazed grasslands.

To address this knowledge gap, an international research team quantified the changes in carbon storage and greenhouse gas fluxes in natural and managed grasslands between 1750 and 2012 in their study published in Nature Communications. The study’s comprehensive estimates of global grasslands’ contribution to past climate change illustrate the important climate cooling service provided by sparsely grazed areas, and the growing contribution to warming from quickly increasing livestock numbers and more intensive management ̶ which are in turn associated with more CH4 and N2O emissions ̶ in determining the contemporary net climate effect of the grassland biome.

“We built and applied a new spatially explicit global grassland model that includes mechanisms of soil organic matter and plant productivity changes driven by historical shifts in livestock and the reduction of wild grazers in each region. This model is one of the first to simulate the regional details of land use change and degradation from livestock overload,” explains Jinfeng Chang who led this study at IIASA and is now based at Zhejiang University in China. “We also looked at the effect of fires, and soil carbon losses by water erosion; CH4 emissions from animals; N2O emissions from animal excrement, manure, and mineral fertilizer applications; and atmospheric nitrogen deposition.”

The study shows that emissions of CH4 and N2O from grasslands increased by a factor of 2.5 since 1750 due to increased emissions from livestock that have more than compensated for reduced emissions from the shrinking number of wild grazers. The net carbon sink effect of grasslands worldwide – in other words, the ability of grasslands to absorb more carbon and pack it in the soil – was estimated to have intensified over the last century, but mainly over sparsely grazed and natural grasslands. Conversely, over the last decade, grasslands intensively managed by humans have become a net source of greenhouse gas emissions – in fact, it has greenhouse gas emission levels similar to those of global croplands, which represent a large source of greenhouse gases.

“Our results show that the different human activities that have affected grasslands have shifted the balance of greenhouse gas removals and emissions more towards warming in intensively exploited pastures, and more towards cooling in natural and semi-natural systems. Coincidently, until recently the two types of grasslands have almost been canceling each other out,” notes coauthor Thomas Gasser from IIASA. “However, the recent trends we see towards the expansion of pasture land and higher livestock numbers lead us to expect that global grasslands will accelerate climate warming if better policies are not put in place to favor soil carbon increases, stop deforestation for ranching, and develop climate-smart livestock production systems.”

According to the authors, the cooling services provided by sparsely grazed or wild grasslands, makes it clear that countries should assess not only the greenhouse gas budgets of their managed pastures (such as specified in the current national greenhouse gas reporting rules of the UN’s Framework Convention on Climate Change), but also the sinks and sources of sparsely grazed rangelands, steppes, tundra, and wild grasslands. Full greenhouse gas reporting for each country could facilitate the assessment of progress towards the goals of the Paris Agreement and better link national greenhouse gas budgets to the observed growth rates of emissions in the atmosphere.

“In the context of low-warming climate targets, the mitigating or amplifying role of grasslands will depend on a number of aspects. This includes future changes in grass-fed livestock numbers; the stability of accumulated soil carbon in grasslands; and whether carbon storage can be further increased over time or if it will saturate, as observed in long-term experiments,” concludes Philippe Ciais, a study coauthor from the Laboratory for Sciences of Climate and Environment (LSCE).