Raising climate ambitions could save millions of lives 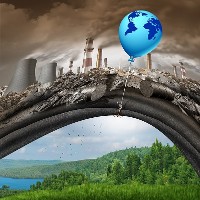 Paris signatories are updating and revising their climate change mitigation plans – Nationally Determined Contributions (NDCs) – ahead of COP26 this year. Currently, NDCs globally are not strong enough to achieve the Paris agreement (there is currently a risk of a global temperature rise of greater than 3°C).

IIASA researchers from the Pollution Management Research Group contributed to new research from the Lancet Countdown on Health and Climate Change published in a special issue of The Lancet Planetary Health journal, which highlights the benefits to health if countries adopt NDCs that are consistent with the Paris Agreement’s aim of limiting warming to “well below 2°C”.  The countries considered in the study – Brazil, China, Germany, India, Indonesia, Nigeria, South Africa, the UK, and the US – represent 50% of the world’s population and 70% of the world’s greenhouse gas emissions.

According to lead author Ian Hamilton, Executive Director of The Lancet Countdown on Health and Climate Change and Associate Professor at the University College London Energy Institute, the report focuses on a crucial but often overlooked incentive for tackling climate change. Unlike the direct benefits of carbon mitigation, which are ultimately long-term and understood in terms of damage limitation, the health co-benefits of ambitious climate policies have an immediate positive impact.

For each of the countries considered in this study, emissions of air pollution and greenhouse gases, and annual deaths due to air pollution, diet-related risk factors, and physical inactivity, were estimated for the year 2040 for three different NDC scenarios. The baseline scenario looked at current NDC policies, the second scenario at NDC policies in line with the Paris Agreement combined with Sustainable Development Goals, and a third scenario looked at the additional benefit from embedding explicit health objectives within the sustainable pathways.

Across all nine countries, the Paris Agreement-compliant scenario, could save 5.8 million lives due to healthier diet, 1.2 million lives due to cleaner air, and 1.1 million lives due to increased physical activity. Adopting the more ambitious strategy, with explicit health objectives within the NDCs, could result in a further reduction of 572,000, 462,000, and 943,000 annual deaths attributable to diet, air pollution, and physical inactivity, respectively.

The IIASA team specifically worked on the quantification of greenhouse gas and air pollution emissions as well as health impacts from ambient fine particulate matter (PM2.5) under the different scenarios, using the well-established IIASA GAINS model.

“To avoid the worst effects of climate change, we need to reach net-zero CO2 emissions by 2050. Our results affirm that well designed mitigation policies can indeed result in cleaner air and better health, which are often also associated with substantial economic benefits. If we can manage this, it will be a win-win situation all around,” notes IIASA researcher Gregor Kiesewetter who worked on the quantification of ambient air pollution and related mortality in the study.

The researchers note that the number of deaths averted through improved air quality, diet, and physical activity were quantified separately and cannot be added up, as they do not account for crossover effects. As the modeling study projects into possible futures, they also note that the estimates relied on various assumptions of future demographic and socioeconomic trends.

Some countries have strengthened their efforts since the analysis was done, with the UK and EU submitting stronger NDC targets, while China has announced its commitment to achieving carbon neutrality before the year 2060, and the US has promised to commit to net zero emissions by the year 2050. The researchers however note that even with these new announcements, the world is not yet on track to meet the goals of the Paris Agreement and may still face warming above 2°C by the end of the century.

Adapted from a press release prepared by University College London.