Assessing the risks of human displacement in a changing climate

Each year, disasters force millions of people to move from their homes, with profound human and financial consequences, and climate change is making the situation worse. But recent work involving novel modeling and new data makes it possible to assess these risks and prepare for them. 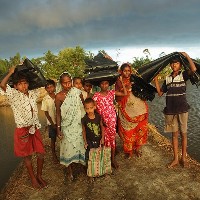 Flooding, droughts and other pressures have displaced more than 24 million people per year on average since 2008. Climate change is increasing these risks, with rising sea levels and changing weather patterns, and yet there is little preparation for this problem. Instead, displacements are only dealt with after they happen, mainly by overstretched local governments and charities.

It would be much better to plan ahead, to reduce risk and prepare to help displaced people, according to an article led by Bina Desai of the Internal Displacement Monitoring Centre (DIMC) published in Science, which includes two authors at IIASA.

“We are saying that this is both necessary and increasingly possible,” says Reinhard Mechler, who leads the IIASA Systemic Risk and Resilience Research Group in the Advancing Systems Analysis Program.

Such a forward-thinking approach is becoming more feasible as risk assessments improve, giving a clearer view of the future.

“Disaster and climate risk modeling is maturing in various domains,” says coauthor Stefan Hochrainer-Stigler, a senior researcher in the same group at IIASA.

For example, drivers of displacement and migration can be addressed by new agent-based models, representing how people respond to calamities; and databases are being upgraded to better record key data, from the probability of a disaster occurring to its socioeconomic impacts.

The article points out that changes in population and climate are both major factors in future displacement risk. Recent modeling suggests that each degree of global warming may lead to a roughly 50% increase in the number of people displaced, if no further action is taken.

With increasingly realistic assessments of risk, it should be possible to prepare for this. In particular, knowing the likely financial and human cost of displacement can inform judgements on how to reduce vulnerability, for example through better flood protection and community self-help groups, and also through tackling root causes such as poverty. Another option is to relocate people and infrastructure away from high-risk areas. This is a complex and controversial measure, but it is already happening in some places in Asia and Oceania.

Displacement mainly happens in less developed countries, which generally cannot afford the necessary investments. Given the link to climate change, largely caused by historical emissions, richer nations and the international community are called upon, says Mechler.

The paper will be presented at a Columbia University conference on 25 June 2021. The event will address resilience, relocation, and climate justice in a session co-led by IIASA that will gather partners from research, practice, and policy to discuss transdisciplinary approaches for understanding managed retreat across hazards, scales, and geographies.