Agriculture and conservation objectives do not have to be at odds

Crop and livestock production are among the main drivers of biodiversity loss globally. Due to the ever-increasing demand of land for food production, reverting global biodiversity decline and feeding the world is one of the greatest challenges of our time. A new study finds that integrating food production and biodiversity conservation within a single spatial planning framework can minimize these trade-offs to the benefit of both nature and people. 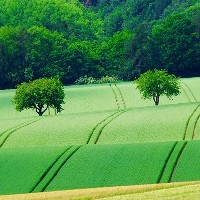 One in four species are currently at risk of extinction, mostly because of our current unsustainable way of life. In response to this crisis, the parties of the Convention on Biological Diversity are drafting a comprehensive strategy aimed at first slowing down and then reverting current biodiversity trends through a comprehensive set of 20 targets designed to address the drivers of biodiversity loss in both land and water systems.

Three of these targets are specifically concerned with conserving and restoring areas important for biodiversity and planning land- and sea-use. What makes implementing such targets difficult, is the fact that allocating areas for conservation cannot be done without accounting for aspects of rural development and the increasing demand for farmland products  ̶  the main driver of biodiversity loss through habitat loss, degradation, pollution, and other direct drivers of global biodiversity decline.

The authors of the study just published in the journal One Earth, set out to assess the ecological effectiveness and feasibility of these proposals for area-based conservation measures, building on the premise that treating these two objectives separately in independent planning processes leads to higher conflicts and poorer outcomes, either for biodiversity or for local livelihoods, depending on which aspect is given more importance.

“The traditional paradigm of research in conservation planning has been to identify areas important for conservation. When considered at all, socioeconomic factors were typically accounted for as either costs or constraints to conservation actions. The reality is that rural development and food production are socioeconomic objectives that are pursued through policies and implemented via spatial planning – in other words, decisions about land or sea management – and other regulatory and financial instruments,” explains IIASA Biodiversity, Ecology, and Conservation Research Group Leader Piero Visconti, one of the study authors. “Similarly, research studies investigating rural development policies often treat areas of biodiversity value, such as areas with high species richness, as spatial constraints to confine agricultural activities, as opposed to objectives pursued through land-use management decisions.”

In their paper, the researchers propose using spatial planning decision support tools to plan for agricultural activities and biodiversity conservation within a single planning process, aiming to achieve both sets of objectives at once. This better reflects how land-use decisions are made regarding farmland development and is helpful in estimating the upper bound of the feasibility and efficiency of integrating ecological knowledge and biodiversity objectives into all spatial planning decisions.

The researchers found that integrating biodiversity and food production objectives in spatial planning for land-use could achieve similar biodiversity benefits at 25%–40% of the opportunity cost for food production, or 400%–600% of the biodiversity benefit for similar opportunity costs, as opposed to planning for each objective separately. This clearly shows that joint planning processes for rural development and biodiversity conservation are far more ecologically effective and socioeconomically feasible than separate strategies and planning processes for protection or restoration and rural development.

To shed further light on why earlier studies found different results, the authors replicated their extreme assumption that areas dedicated to biodiversity conservation cannot simultaneously be used for food production, and found that this is the factor that most influences the trade-offs between these objectives and lead to the extreme conclusions.

“Conservation objectives should not be relegated to 30% of the planet. Rather, they have to be embedded in all planning decisions. In addition, conservation organizations at all levels need to work with the primary sector to avoid being in conflict with forestry, mining, farming, and other extractive and productive industries. As this study and others in the marine system have shown, rather than fighting bad planning decisions, it is possible to meet primary socioeconomic needs and biodiversity objectives together through joint spatial planning processes,” Visconti concludes.