Internationally renowned IIASA researchers Guenther Fischer and Nebojsa Nakicenovic were the first to be honored with the newly established IIASA Lifetime Achievement Award at Monday night’s public lecture co-organized by IIASA and the Austrian Academy of Sciences. 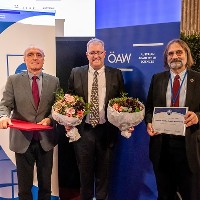 The IIASA Lifetime Achievement Award represents the pinnacle scientific award made by the institute and serves to recognize individuals who have been true flagbearers of IIASA and have guided the institute in its aspiration to deliver scientific excellence in pursuit of answers to some of the complex global and universal problems faced by humanity. The awards are made to senior IIASA researchers of exceptional distinction after formal retirement.

This year’s recipients, Guenther Fischer and Nebojsa Nakicenovic, certainly measure up to these criteria and are both internationally renowned for the outstanding international scientific impact and reach of their work over the course of their respective careers, as well as for their scientific leadership through participation in international science and policy advisory structures.

Fischer joined IIASA in 1975 after completing his degree in technical mathematics and is currently an emeritus research scholar in the Water Security Research Group of the IIASA Biodiversity and Natural Resources Program. Between 1995 and 2012, he served as program leader for the former IIASA Land Use Change and Agriculture Program and he has acted as mentor for dozens of colleagues both inside and outside IIASA, as well as for participants in the IIASA Young Scientists Summer Program (YSSP). His involvement in and leadership of projects has led to the development of numerous products that have not only been applied globally, but also at national scales around the world. This includes the integrated ecological-economic framework that emphasized the risks of excessive biofuel production on global food security, and the Global Agro-Ecological Zones (GAEZ) modeling system that delivers high-resolution information on the impacts of climate change on agricultural production, land cover, and water resources. In addition, he worked on the World Food System Model that applied general equilibrium approaches to global agricultural markets and stressed the impact of market failures on global hunger, which was subsequently incorporated into Intergovernmental Panel on Climate Change (IPCC) reports and led to his sharing the Nobel peace prize with other IPCC authors in 2007. 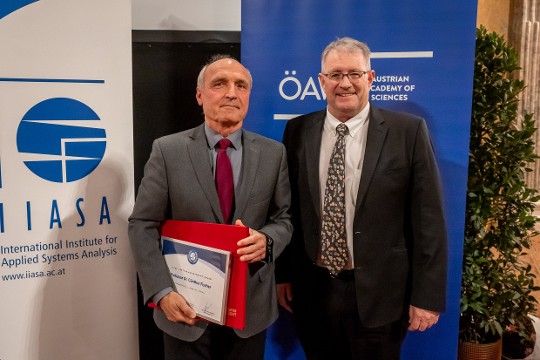 Nebojsa Nakicenovic joined IIASA in 1973 as a research assistant in the Energy Program and is currently an emeritus research scholar in the Energy, Climate, and Environment Program. Over the years, he has provided invaluable service to IIASA in terms of both scientific and institutional leadership. In this regard, he served in several leadership capacities at IIASA, including Deputy Director General of IIASA from 2008 to 2018 and as Acting Director General at the request of the IIASA Governing Council in 2018. He has dedicated his career to establishing the institute as one of the leading science research institutions in the world, and notably paved the way for the institute’s continued role within the IPCC. Between 2006 and 2012, he established and led the Global Energy Assessment, one of the institute’s flagship activities. Its findings directly shaped Sustainable Development Goal (SDG) 7 - to ensure access to affordable, reliable, sustainable, and modern energy for all. The World in 2050, an initiative that includes 50 institutions from around the world and provides cutting-edge, cross-disciplinary science for formulating policies, strategies and transformative pathways for achieving the SDGs, was also established at IIASA in 2017 under Nakicenovic’s initiative and direction. His scientific contributions are recognized and acknowledge the world over as is evidenced by the advisory bodies such as the UN Secretary General Advisory Board, the German Advisory Council on Global Change, the Group of Chief Scientific Advisors to the European Commission, numerous research and private sector institutions, and several prominent editorial boards he serves on. 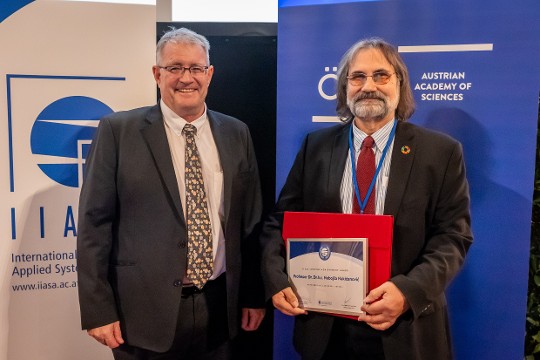 “It is a great pleasure and honor to award these IIASA Lifetime Achievement Awards to Guenther Fischer and Nebojsa Nakicenovic. Their commitment to advancing systems analysis and integrated approaches in science, science-to-policy, and policymaking is unquestionable. Their intellectual and policy impacts have not only left a distinct mark of achievement, but stretch beyond the boundaries of IIASA members, and have frequently contributed to the improvement of the human condition across the world. We are proud to call them members of the IIASA family,” concludes IIASA Director General Albert van Jaarsveld.