Awards support the next generation of systems analysis researchers

Expanded awards for young scientists will enable a growing number of outstanding researchers to conduct research at IIASA. 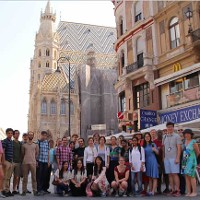 IIASA today announced the winners of the annual Peccei and Mikhalevich awards for Young Scientists Summer Program (YSSP) participants, which will enable four participants from the 2015 YSSP to return to the institute for another three months to continue their research projects. These awards, named in honor of IIASA alumni Aurelio Peccei and Vladimir S. Mikhalevich, are given each year for outstanding work by YSSP participants.

Awards generously funded by IIASA alumni and other donations also give additional students the chance to participate in the YSSP. The IIASA Annual Fund supports several students, often from developing countries, who would not otherwise be able to participate in the program. The Petr Aven Fellowship, supported by economist and YSSP alumnus Petr Aven, funds one student from Russia or a developing country. And a new fellowship started in 2015 by former IIASA director Roger Levien supports a student from Pardee RAND Graduate School.

Carlijn Hendriks, from the Netherlands, will receive the Peccei Award for her paper “Impact of EU climate and air quality policy on future ground level ozone concentrations and damage in Europe.”  Hendriks conducted her study in collaboration with the Mitigation of Air Pollution and Greenhouse Gases (MAG) and Ecosystem Services and Management  (ESM) programs.

Zhimin Mao, who is studying in the USA, will receive the second Peccei Award for her paper “Evaluation of costs and effectiveness of Pearl River Delta’s air Pollution Reduction Action Plan.” Mao was the recipient of the 2015 Roger Levien Fellowship, and worked in the MAG program.

Celian Colon of France will receive the Mikhalevich Award for his study, “Systemic risks and cascading disruptions in complex supply chains,” with the IIASA Evolution and Ecology Program (EEP).

Hanna ten Brink, from the Netherlands, will receive the second Mikhalevich Award for her paper “The origin of metamorphosis and its consequences for harvested fish populations,” also with EEP.

Donate Now to support the 2016 YSSP