Without additional action and advanced technologies, global emissions are expected to be 33% above the 2°C pathway in 2030, according to a new report from a group of leading international scientists including IIASA Deputy Director General Nebojsa Nakicenovic. 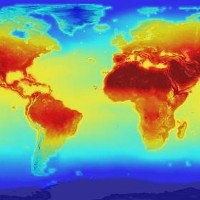 A NASA climate change projection for temperature rise by 2100. © NASA

A temperature rise of  2°C over pre-industrial levels could be reached as soon as 2050, according to a new report entitled The Truth about Climate Change, which was released today by the Universal Ecological Fund (FEU-US). The 2°C target was formally agreed upon at the Paris climate talks in 2015, as an international target to avoid the worst effects of climate change.

“Climate change is happening now and much faster than anticipated,” says Robert Watson, former Chair of the IPCC, one of the report co-authors. “While the Paris Agreement on Climate Change is an important step in the right direction, what is needed is a doubling or tripling of efforts.”

The new report summarizes and synthesizes the conclusions from the IPCC and key climate research to analyze the outcome of the December 2015 Paris Climate Conference. It addresses a number of key questions, including how successful the Paris agreement was, whether current pledges are enough to tackle climate change, what else needs to be done, when the 2°C limit might be reached, how to reduce emissions to zero, and why the public has misunderstood the urgency of climate change.

The report pulls together answers to these key questions based on research from the IPCC, UN Environment program, among others. IIASA Deputy Director General Nebojsa Nakicenovic contributed to the report, which emphasizes that the world needs a drastic change in its energy systems. He says, “Actions in all sectors contribute to emission reductions. For example, cars and buildings with decarbonized electricity also means that overall emissions will in those sectors would decline to zero. The Herculean challenge ahead that net zero emissions would need to be achieved globally during the next half centry .”

The report also addresses the potential of future mitigation options such as negative emissions, which remain controversial.

“The dependence on these negative emission technologies as an option to mitigate climate change is still unproven,” says Nakicenovic. “Further delaying action to transition to a low-carbon economy and relying instead on these future technologies is not an option.”

In advance of the next international climate negotiation conference in November in Morocco, the new report provides a sound basis for policymakers looking for guidance on climate policy.

The new analysis, titled The Truth About Climate Change, is co-authored by six top climate scientists and Liliana Hisas of the Universal Ecological Fund (FEU-US). The report summarizes and synthesizes the conclusions from the IPCC and key climate research to analyze the outcome of the December 2015 Paris Climate Conference.