An end to population aging in China, Germany, USA

New measures of aging, combined with UN population projections, show that population aging is likely to end before 2100 in China, Germany, and the USA. 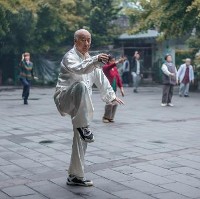 Population aging could peak by 2040 in Germany and by 2070 in China, according to a new study published in the journal PLOS ONE, which combines new measures of aging with probabilistic population projections from the UN. In the USA, the study shows very little population aging at all in the coming century.

Population aging has been a major concern for many countries. Growing numbers of older people compared to younger ones in a population could create unsustainable burdens on social support and healthcare systems if a greater number of older people are dependent on a declining proportion of working-age people in the population.

Traditional population projections categorize “old age” as a simple cutoff at age 65. But as life expectancies have increased, so too have the years that people remain healthy, active, and productive. In the last decade, IIASA researchers have published a large body of research showing that the very boundary of “old age” should shift with changes in life expectancy, and have introduced new measures of aging that are based on population characteristics, giving a more comprehensive view of population aging.

The study combines these new measures with UN probabilistic population projections to produce a new set of age structure projections for four countries: China, Germany, Iran, and the USA. 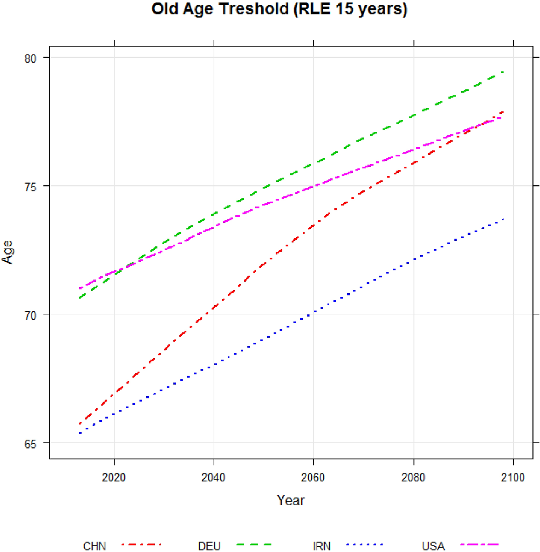 This graph shows how the threshold of old age is projected to change in the four countries from today through 2100. As life expectancy grows longer, IIASA's new measures allow for an adjustment of the old age threshold that more accurately reflects people's capabilities. ©Sanderson & Scherbov, 2017.

“Both of these demographic techniques are relatively new, and together they give us a very different, and more nuanced picture of what the future of aging might look like,” says Warren Sanderson, a researcher at IIASA and Stony Brook University in the USA who wrote the article with Sergei Scherbov, leader of the Re-Aging Project at IIASA, and Patrick Gerland, chief of the mortality section of the Population Division of the United Nations.

One of the measures used in the paper looks at life expectancy as well as years lived to adjust the definition of old age. Probabilistic projections produce a range of thousands of potential scenarios, so that they can show a range of possibilities of aging outcomes.

For China, Germany, and the USA, the study showed that population aging would peak and begin declining well before the end of the century. Iran, which had an extremely rapid fall in fertility rate in the last 20 years, has an unstable age distribution and the results for the country were highly uncertain.

“We chose these four countries for analysis because they have very different population structures and projections, and so they allow us to test this methodology across a range of possible scenarios,” says Scherbov.