New research led by IIASA researcher Narasimha Rao has shown how it might be possible to reduce micronutrient deficiencies in India in an affordable way whilst also reducing greenhouse gas emissions. 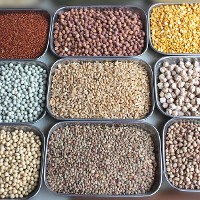 Rao and the team used the National Sample Survey of Consumption Expenditure in India to examine Indian diets, and found that more than two-thirds of the Indian population, around 800 million people, are affected by deficiencies in micronutrients such as protein, iron, zinc, and vitamin A, which contributes to lower life expectancies. Iron deficiencies in particular are close to 90%, vitamin A deficiencies stand at around 85% and more than 50% of diets are protein-deficient.

India has the second lowest per capita meat consumption in the world and most Indians have a largely vegetarian diet, with low bioavailability of iron. In addition, in many areas of India, polished white rice, which has little nutrient content, is predominant in diets, partly due to food subsidies which make it cheaper than other coarse cereals.

Micronutrient deficiencies are worse in urban than in rural areas, and as may be expected, are worse in lower-income households. There is some regional variation in the data. In the northern and western areas, where a wheat-based diet is more common, nutrient deficiencies are lower than in the south and east of India, where rice is more predominant.

“The conventional wisdom is that calories have to increase to improve nutrition, which is associated with higher food production and higher greenhouse gas emissions,” says Rao.

He and the team compared nutritional information for different food types including rice, cereals, meat, and dairy products, as well as looking at the cost to households and the greenhouse gas emissions. They also looked at various scenarios, including with and without food subsidies. They found that at current prices households can affordably improve micronutrition by moving away from consuming white, polished rice and instead choose wheat, maize, and millet products, and choose chicken and legumes over beef and eggs to boost protein intake. Adding green leafy vegetables and coconut would also reduce deficiencies cost-effectively, even for the those in poverty.

Rao says that policymakers should consider introducing subsidies for nutrition- and climate-friendly food products such as coarse cereals, pulses, and dark green vegetables. He adds that the insights provided by the research on the possible improvements to diet also hold true outside India.

“The next stage in the research should be to investigate the acceptability of possible diet changes, the feasibility of shifts in agricultural production patterns, and any other potential environmental impacts,” he says.