Clean power is not enough: More action in other sectors needed to meet Paris targets

CO2 emissions from non-electricity energy uses, such as industry, transport, and heating, are the greatest impediment to meeting the Paris climate targets, according to new research from an international team of scientists. 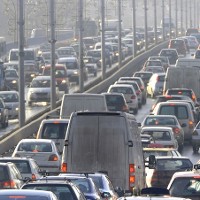 Debates about the Paris climate targets often center around electricity supply. Yet, even in a world of stringent climate policies and clean power generation, the remaining use of fossil fuels in industry, transport, and heating in buildings could still cause enough CO2 emissions to endanger the climate targets agreed on by the international community. Published in Nature Climate Change, the new study, coauthored by IIASA researchers and led by the Potsdam Institute for Climate Impact Research (PIK), is the first to focus specifically on the residual emissions from sectors that are not as easily decarbonized as power generation.

“We wanted to decipher what really makes the difference in terms of carbon budgets and residual emissions. To identify crucial decarbonization bottlenecks towards 1.5-2°C stabilization, we focused on the role of fossil fuel emissions that originate in industries like cement or steel making, fuel our transport sector from cars to freight to aviation and goes into heating our buildings,” says Shinichiro Fujimori, a researcher from the National Institute for Environmental Studies (NIES) and Kyoto University in Japan. “These sectors are much more complicated to decarbonize than our energy supply, as there are no such obvious options available as wind and solar electricity generation.”

It is these activities that crucially determine how much CO2 will be emitted within this century, and how much the world will have to rely on negative emissions technologies if the climate targets are to be met.

The researchers find that for the 1.5°C temperature limit, negative emissions technologies might no longer be just an option, but a necessity. The Paris goal of keeping global warming well below 2°C and further pursuing to limit it to 1.5°C implies a remaining carbon budget of just 200 billion tons of CO2 until 2100, which is in stark contrast to the 4,000 billion tons of CO2 that would be emitted until 2100 if current trends continue. Mitigation efforts pledged so far are inadequate to reduce emissions sufficiently. This gives rise to concerns about the increasing reliance on uncertain and potentially risky technologies for so-called negative emissions technologies to remove greenhouse gases from the air, such as bioenergy plantations combined with carbon capture and storage (CCS).

“We found that even with enormous efforts by all countries, including early and substantial strengthening of the intended Nationally Determined Contributions (the NDCs), our calculations show that residual fossil carbon emissions will remain at about 1,000 Gigatons of CO2,” explains lead author Gunnar Luderer from PIK. “This seems to be a lower end of what can be achieved with even the most stringent climate policies, because much of the residual emissions are already locked-into the system due to existing infrastructures and dependencies on fossil fuels. To aim for the ambitious 1.5°C target for end-of-century warming would mean that an incredibly huge amount of at least 600 Gigatons of CO2 removal was required.”

The team of computer modelers from Europe, the US, and Japan used seven integrated assessment models to look at different climate change scenarios. Their study is the first to compare scenarios where stricter emissions reduction policies in line with the Paris climate targets are adopted, with scenarios where countries continue with the existing Nationally Determined Contributions (NDCs) set out as part of the Paris Agreement, which many agree are insufficient to meet the targets.

“Even if we start being serious about emissions reductions today, about 25 years’ worth of today's emissions are still expected to be produced by the accumulated industrial, transport, and building infrastructure of the world. However, if we follow what countries have promised under the Paris Agreement and wait until after 2030 with serious emissions reductions, even more emissions will be locked in and the world will have to rely much stronger on CO2 removal technologies that remain unproven at scale,” says IIASA researcher Joeri Rogelj.

Not strengthening the NDCs before 2030 would not only increase near-term emissions, but would also hurt the longer-term emission reduction potentials as it locks in even more investments into fossil-based infrastructures, according to their study.

“Climate mitigation might be a complex challenge, but it boils down to quite simple math in the end: If the Paris targets are to be met, future CO2 emissions have to be kept within a finite budget,” says Elmar Kriegler from PIK, adding: “While it may still be difficult to determine the exact remaining CO2 budget for 1.5°C, one thing is very clear – ambitions to reduce fossil fuel emissions have to be ramped up substantially and soon to keep doors open to meet the Paris targets.”

The research leading to these results has received funding from the European Union’s Seventh Programme FP7/2007-2013 under grant agreement no. 308329 (ADVANCE) as well as the Horizon 2020 Research and Innovation Programme under grant agreement no. 642147 (CD-LINKS). PIK also received support from the Federal Ministry of Education and Research as part of ENavi, one of the four Kopernikus Projects.

Text adapted from a press release by the Potsdam Institute for Climate Impact Research (PIK), Germany