The agricultural sector is the world’s largest source of non-CO2 greenhouse gas emissions, and IIASA-led research has found that changing agricultural practices and a shift in diet away from meat and dairy products could reduce the sector’s emissions by up to 50% by 2050 compared to a situation without mitigation efforts. 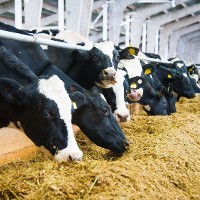 IIASA researcher Stefan Frank led the team which carried out the first detailed analysis of agricultural non-CO2 mitigation using a combination of four different global economic models and assessed the reduction potential. They used the carbon price in the models to estimate the mitigation potential of each option, although Frank stresses that carbon taxes are not considered a likely policy instrument for the agricultural sector in reality.

“We gain insights on the contribution of different mitigation options across regions and identify robust emission reduction strategies both on the supply and demand side,” he says.

Efforts in the agricultural sector alone could reduce up to 15% of agricultural methane and nitrous oxide emissions by 2050, a total of 0.8-1.4 gigatonnes of carbon dioxide equivalent per year (GtCO2e/y), at an already low cost of US$20/t CO2e. Dietary changes in overconsuming countries could contribute additional reductions of 0.6 Gt CO2e/y, a total emissions reduction of 23%.

The researchers used the Global Biosphere Management Model (GLOBIOM), developed at IIASA, and CAPRI, IMAGE, and MAGNET, developed by the University of Bonn, PBL Netherlands Environmental Assessment Agency, and Wageningen University, respectively, to model eight carbon price trajectories ranging from US$20/t CO2e emitted, to US$950/t CO2e by 2050 to estimate the economic emission reduction potential from the sector. This highest figure is thought to be the price needed to meet the 1.5°C climate stabilization target across all sectors of the economy.

At the highest carbon prices of US$950/t CO2e, agriculture could achieve emissions reductions of 3.9 Gt CO2e/y by 2050, 50% lower than the baseline scenario without climate change mitigation efforts.

Methane and nitrous oxide emissions from agriculture currently make up 10-12% of anthropogenic greenhouse gas emissions, and the percentage is growing, largely thanks to the increased use of synthetic fertilizers and growing ruminant herds. Since 1990, emissions have increased by a third, but the data shows that production is up by 70%, so agriculture is becoming more efficient over time. If the world is to meet the 1.5°C climate stabilization target set out under the Paris Agreement, however, these emissions will need to fall.

The beef and dairy industries are highly greenhouse gas intensive, and across all models and carbon price scenarios, had the potential to contribute more than two thirds of the total mitigation potential in agriculture.

Frank and his colleagues identified three areas for mitigation on the supply side – technical options such as animal feed supplements to improve feed digestibility or anaerobic digesters, structural options, which are more fundamental changes to agriculture such as changes to crop and livestock portfolios, and production effects such as changes in production levels. Demand side options involved consumers in developed and emerging countries switching to diets with fewer animal products.

“Steering mitigation action towards a limited number of regions, such as Africa, China, India, and Latin America, and commodities such as beef and milk, which are characterized by relatively high emission intensities, would allow for the realization of substantial emissions savings on the supply side,” says Frank.

The models show that as carbon prices rise, technical and structural options become exhausted, after which emissions reductions can be achieved through reducing production and consumption of greenhouse gas intensive products, such as meat and dairy. Such dietary changes would have an added benefit. As demand drops in overconsuming countries, less nitrous oxides and methane is emitted while at the same time it would also yield a more balanced distribution of the calorie intake from meat and dairy across more world regions with benefits for food security.

“The models agree that diet change can contribute only part of the efforts needed to achieve the 1.5°C climate stabilization target and policymakers should not forget about the production side measures which in this study provide the large majority of the mitigation potential.” says IIASA researcher and coauthor Petr Havlík. “The comparison across multiple models also shows that there are still substantial uncertainties in the reference level non-CO2 emissions development and the related mitigation potential. Unless these uncertainties are reduced, they will need to be factored in the plans of deployment of negative emissions technologies”.

As countries will have to periodically monitor progress and take stock of the implementation of the Paris Agreement, the insights provided in the study could help policymakers to identify regional mitigation priorities in the sector and have a better understanding of the potential contribution of agriculture.