Diffusing the methane bomb: We can still make a difference

The Arctic is warming twice as fast as the rest of the planet, causing the carbon containing permafrost that has been frozen for tens or hundreds of thousands of years to thaw and release methane into the atmosphere, thereby contributing to global warming. The findings of a study that included researchers from IIASA, however, suggest that it is still possible to neutralize this threat. 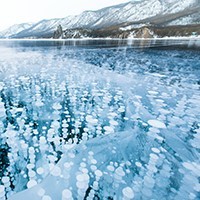 Permafrost is soil that remains frozen for two or more consecutive years. It is usually composed of rock, soil, sediments, and varying amounts of ice that bind the elements together. The permafrost of the Arctic landscape represents one of the largest natural reservoirs of organic carbon in the world. When the permafrost thaws, the soil microbes contained in the soil can turn the carbon into carbon dioxide and methane, which are both greenhouse gases that are known to contribute to global warming when released into the atmosphere. Unfortunately, this is exactly what is currently happening as a result of climate change. In fact, the massive amounts of methane that could potentially be released as a result of permafrost thaw, has often been described as a ticking time bomb and has long been a concern for climate scientists.

A study by researchers from IIASA, Canada, Denmark, Norway, and Sweden, however, suggests that it is possible to neutralize the natural gas threat that lies in wait under the Arctic soil. The team looked at several possible future scenarios, including some where the world continues to release manmade carbon and methane emissions into the atmosphere at the current rate, and some where we meet the targets of the Paris Agreement.

In their analysis, the researchers quantified the upper range value for natural methane emissions that can be released from the Arctic tundra, as it allows it to be put in relation to the much larger release of methane emissions from human activities. Although estimates of the release of methane from natural sources in the Arctic and estimates of methane from human activity have been presented separately in previous studies, this is the first time that the relative contribution of the two sources to global warming has been quantified and compared.

“It is important to put the two estimates alongside each other to point out how important it is to urgently address methane emissions from human activities, in particular through a phase out of fossil fuels. It is important for everyone concerned about global warming to know that humans are the main source of methane emissions and that if we can control humans’ release of methane, the problem of methane released from the thawing Arctic tundra is likely to remain manageable,” explains Lena Höglund-Isaksson, a senior researcher with the IIASA Air Quality and Greenhouse Gases Program and one of the authors of the study published in Nature Scientific Reports earlier this week.

According to the researchers, their findings confirm the urgency of a transition away from a fossil fuel based society as well as the importance of reducing methane emissions from other sources, in particular livestock and waste. The results indicate that man-made emissions can be reduced sufficiently to limit methane-caused climate warming by 2100 even in the case of an uncontrolled natural Arctic methane emission feedback. This will however require a committed, global effort towards substantial, but feasible reductions.

“In essence, we want to convey the message that the release of methane from human activities is something we can do something about, especially since the technology for drastic reductions is readily available - often even at a low cost. If we can only get the human emissions under control, the natural emissions should not have to be of major concern,” concludes Höglund-Isaksson.