Weighing up trade-offs between food security and climate mitigation

IIASA researchers collaborated with colleagues in Japan to clarify the impacts of stringent climate mitigation policies on food security. The team identified smart and inclusive climate policy designs where the risk of food-security for hundreds of millions of people could be addressed at a modest cost. 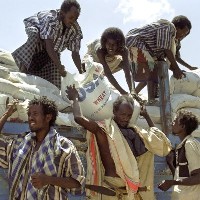 In a study published today in Nature Sustainability, an international research group that included researchers from IIASA, Kyoto University, Ritsumeikan University, and the National Institute for Environmental Studies (NIES), Japan, for the first time estimated how food security could be negatively affected by the climate mitigation policies implemented by multi-Integrated Assessment Models (IAMs) and the cost associated with avoiding adverse side effects. More specifically, they clarified the relationship between food security and climate mitigation, and provided cost estimates for possible solutions to the trade-off between food security and climate mitigation, taking into account the uncertainty represented by an ensemble of IAMs.

Food security is one of the areas addressed by the UN Sustainable Development Goals (SDGs). The aim of SDG2 in particular, is to achieve “zero-hunger” by 2030. The issue of food security has been studied extensively in the context of climate change impacts associated with yield changes over the last few decades, and more recent studies also explored the effect of climate change mitigation on agricultural markets.

The Paris Agreement defines a long-term temperature goal for international climate policy: “holding the increase in the global average temperature to well below 2°C above pre-industrial levels and pursuing efforts to limit the temperature increase to 1.5°C”. Accordingly, studies investigating the climate change mitigation required by the Paris objectives have identified a potential need for land-based measures like afforestation and large-scale bioenergy production, which could in turn raise concerns about implications for food security. These low emission scenarios are making the connection between SDG2 (hunger) and SDG13, which specifically concerns climate action, increasingly crucial.

According to the researchers, climate change mitigation exclusively aimed at attaining climate goals could generate a risk of negatively impacting food security. If not managed properly, the risk of hunger due to mitigation policies is remarkably amplified: under the 2°C and 1.5°C scenarios, for instance, the risk of hunger drastically changes compared to the baseline scenarios. Depending on the scenario, the results indicate that an additional 130 to 280 million people could be at risk of hunger in 2050.

The team further examined the costs of possible solutions to such unintended adverse-side effects through “smart and inclusive climate policies”. Several economic alternatives were explored, including agricultural subsidies, food aid to low-income countries, and food aid only to populations at risk of hunger. The costs of the alternatives were found to be between 0 and 0.46% of GDP. These are very modest figures if compared to the costs of climate change mitigation.

The researchers note that direct impacts of climate change on yields were not assessed and that the direct benefits from mitigation in terms of avoided yield losses could be significant, thus further lessening the above costs. While results vary across models and model implementations, the qualitative implications are robust and call for a careful design of climate mitigation policies taking into account agriculture and land prices.

“While we found a similar effect in an earlier joint paper published in Environmental Research Letters, this time we applied multiple alternative models and showed that the results are robust and have a very high confidence,” explains Shinichiro Fujimori from Kyoto University, lead author of the paper and a guest researcher in the IIASA Energy Program. “We would like to emphasize that land and food related climate change mitigation policies should be carefully designed. Policymakers should be aware that potential issues could arise as a result of the uniqueness of the food system compared to, for example, the energy system.”

“The findings of the paper are central to understanding that we can reach very low climate targets together with sustainable land-use and agricultural development,” adds IIASA Energy Program Director Keywan Riahi. “Climate policies need to go beyond carbon pricing, take into account distributional effects, and shield the poor. If properly managed, the costs of such policies will be relatively small.”

Adapted from a press release prepared by Kyoto University, Japan.

Kyoto University is one of Japan and Asia's premier research institutions, founded in 1897 and responsible for producing numerous Nobel laureates and winners of other prestigious international prizes. A broad curriculum across the arts and sciences at both undergraduate and graduate levels is complemented by numerous research centers, as well as facilities and offices around Japan and the world. For more information please see: http://www.kyoto-u.ac.jp/en