Shedding light on the key determinants of global land use projections

Land use is at the core of various sustainable development goals. An international research group consisting of researchers from several institutions including PBL Netherlands, IIASA, and the Potsdam Institute for Climate Impact Research, endeavored to disentangle the key determinants of global land use projections in a study published in Nature Communications this week. 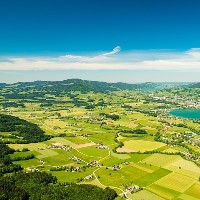 The way that we use available land has important implications for the attainment of economic, environmental, and societal goals. To this end, land use studies have been carried out in countries across the globe, with many large-scale studies looking at future scenarios for our planet. Various models were used for these exercises, resulting in diverse and sometimes inconsistent projections. More recently, specifically in the context of climate change research, researchers have been working to produce more harmonized results by using a commonly approved set of scenarios – the so-called Shared Socioeconomic Pathways (SSPs). These efforts were a first step towards harmonization and consistency, but not all differences between model results could be reconciled.

With this new work, the researchers have decomposed the role of each important scenario driver (including future population, income, dietary patterns, and level of land protection) in the different models to identify what the causes of the discrepancies were. The study made use of systematic sensitivity experiments to explain the spread in models and scenarios, and to identify the main factors determining the transition to a more sustainable (or unsustainable) land future. The results indicate that among the many land use change drivers, our future land footprint will mainly depend on the interplay between population growth, agricultural efficiency, land use regulation, and consumption changes. Going beyond qualitative relations, the team also identified the relative contribution of these factors, and illustrated how the combination of land use regulation, agricultural efficiency, and dietary changes can help limit human pressure on land while safeguarding food security.

“We identified that models were behaving consistently for specific drivers such as population increase and technology but quite differently for others like land use protection or trade openness. This helped us to understand where research should focus to improve the modeling of such scenarios in support of various future assessments, and provide more consistent messages across modeling teams,” explains Hugo Valin, a researcher in the IIASA Ecosystems Services and Management Program and one of the authors of the study.

The study helped to assess what levers could be used to mitigate the future impact of specifically population growth, which was identified as a major driving force. Increasing agricultural productivity, for instance, decreased the amount of land needed to feed each individual. The results also show that enforcing more efficient land use protection for forests and other biodiverse natural habitats mitigates the most adverse impacts of expansion of agricultural land. Lastly, shifting diets towards less resource intensive products, particularly those with a lower share of livestock products, can also alleviate the human pressure on ecosystems and the demand for land.

The study adds an extra level of understanding to how the different options above interact, and how best to combine them. An increase in agricultural efficiency can, for example, reduce demand for cropland, but at the same time boost production and trigger higher consumption levels. Yield increase is therefore shown to be more effective in reducing land use when combined with land use regulation and consumption changes. Similarly, land use regulation can decrease expansion into cropland but may create a risk for food security if not bundled with increased productivity and consumption shifts.

The researchers say that the study is an important milestone for the research community as it will help to elaborate more consistent quantitative scenarios across studies, and ease the comparability of results for policy guidance on all major sustainability challenges related to land use, including climate change impact and mitigation, biodiversity, and food security.