The Digital Revolution: Opportunities and challenges for sustainable development

The Digital Revolution has brought about rapid technological change, transforming the way societies function and how humanity impacts the Earth. A new report describes how digitalization can transform the world and how these changes can be planned for as we move towards 2030 and beyond. 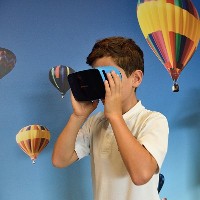 The Digital Revolution, a term often used to describe broad technological change, has entered the public discourse globally and it is becoming increasingly clear that digital changes are a driving force of societal transformation. However, the 2030 Agenda for Sustainable Development and its 17 Sustainable Development Goals (SDGs), which were adopted by the UN in 2015 and provide an aspirational narrative and an actionable agenda to be achieved by 2030, barely mention digitalization. The same applies for the Paris Climate Agreement, in which digitalization is only marginally included. Yet, digitalization can either heavily support or impede the achievement of the SDGs.

“The digital transformation is radically altering all dimensions of global societies and economies and will likely change the interpretation of the sustainability paradigm itself. Sustainable development and digital technology communities are not yet sufficiently linked to fully address these issues. The transformation towards sustainability must be harmonized with the threats, opportunities, and dynamics of the Digital Revolution, the goals of the 2030 Agenda, and the Paris Agreement. Digitalization is not only an instrument that can be used to resolve sustainability challenges, it is also fundamental as a driver of disruptive change on multiple levels,” says Nebojsa Nakicenovic, executive director of The World in 2050 (TWI2050) research initiative.

In the newly published TWI2050 report released by IIASA, the United Nations University Institute for Environment and Human Security (UNU-EHS), and partners titled, The Digital Revolution and Sustainable Development: Opportunities and Challenges, more than 45 authors and contributors from 20 institutions examined the major opportunities and challenges that digital technologies pose to achieving the SDGs. They outline nine key considerations on the linkages between the digital and sustainability revolutions – both positive and negative – and the critical issues that need to be addressed to maximize the opportunities and minimize the risks of digitalization toward a sustainable future for all.

“The mobilization of the enormous potential for a digital sustainability transformation is not an automatic process. In the past one or two decades, digitalization has worked as an accelerator of economic processes that are still predominantly based on fossil energy and resource extraction. However, if course corrections succeed, the disruptive impact of digitization on sustainability can be leveraged to accelerate and enhance a sustainability transformation. We demonstrate in the report how the "missing links" between digitization and sustainability can be created,” explains Dirk Messner, Director of UNU-EHS.

The report points out that we find ourselves in a new era in human history characterized by digital systems such as artificial intelligence and deep learning that enhance, and will eventually complement, or perhaps surpass, human cognitive capabilities in certain areas. The authors urge that sustainability transformations need to be developed, implemented, and reconsidered in this new context and that the SDGs should be regarded as mid-points toward achieving a sustainable future for all by 2050 and beyond, rather than as an end in itself.

A further consideration concerns the possibility that digital technologies can enable a disruptive revolution towards a sustainable future. According to the report, these technologies can be beneficial on many fronts, including enabling decarbonization across all sectors and promoting circular and shared economies. This will however not happen by itself and will likely necessitate a radical reversal of current trends to harmonize the disruptive potentials of digitalization with pathways toward sustainability. In this respect the report highlights that there is a huge need for corresponding regulatory policies, incentives, and shifts in perspectives, which currently only exist in a small number of sectors and a limited number of countries. Closely related to this is an urgent need for governance to counteract the effects of the disruptive dynamics of digitalization, which are challenging the absorptive capacities of our societies, and possibly multiplying the already alarming trends of erosion of social cohesion.

The authors further postulate that the Digital Revolution opens the way for a quantum leap for human civilization itself on a variety of fronts, including medical advances that have already seen human lifespans double over the last century. In addition, autonomous technical and decision-making systems based on machine learning and artificial intelligence are set to fundamentally transform all areas of society and the economy in the future. In fact, some of these, such as current weather forecasting systems, spam filtering programs, and Google’s search engine, which are all powered by artificial intelligence, have already become an unmissable part of our daily lives.

The new report draws attention to the need for policymakers, researchers, companies, and civil society actors to intensify their efforts to understand and explain the multiple effects of digital systems and anticipate far-reaching structural change to create a basis for sustainability transformations. The authors however caution that there is no silver bullet to shape and govern the digital revolution toward sustainability as the future is inherently uncertain – the challenge is to build responsible, resilient, adaptive, and inclusive knowledge societies.

The new TWI2050 report will be launched during a side-event at the UN High-level Political Forum in New York on 12 July 2019. You can access the report here: www.twi2050.org/Report2019