Groundwater maintains vital ecosystems and strongly influences water and energy budgets. Although at least 400 million people in sub-Saharan Africa depend on this valuable resource for their domestic water needs, the processes that sustain it and their sensitivity to climatic variability, are poorly understood. IIASA contributed to a study that looked into climate impacts on groundwater in light of changing climatic patterns in Africa. 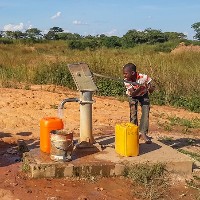 Groundwater is a hidden resource that collects and flows beneath the Earth's surface, filling the porous spaces in soil, sediment, and rocks. It is an important part of the water cycle and a source for aquifers, springs, and wells. It mostly originates from, and is also replenished by, rain, melting snow, and other forms of precipitation that soak into the ground. It plays a central role in sustaining water supplies and livelihoods in sub-Saharan Africa due to its widespread availability, generally high quality, and ability to buffer the impacts of drought and climate variability that characterize this region. Groundwater levels are governed by a complex interplay between replenishment from rain and other sources; and outflows to streams, lakes, oceans or the atmosphere, which are all in turn influenced by a variety of factors from the climate, geology, land cover, and of course, human abstraction. Demand for groundwater is growing rapidly across the continent, which makes it crucial for policymakers to put mechanisms in place for the sustainable management of this valuable resource into the future.

According to the authors of the study published in the journal Nature, a robust, data-driven, understanding of groundwater recharge – and critically its dependence on climate – is fundamentally required to inform water resource decision-making. In addition, the authors emphasize that an improved understanding of groundwater-climate sensitivity is integral to understanding not only today’s water-climate-ecological-human interactions across the region, but also those of the past. Observation data of groundwater resources for Africa is however sorely lacking, which has caused regional governments to rely heavily on large-scale hydrological models to obtain estimates of potential groundwater resources for their water security assessments. Unfortunately, these models remain unvalidated by groundwater observations, which means that the estimates derived from them contain a high degree of uncertainty.

To address these issues, the researchers set out to collect available groundwater data from nine countries across sub-Saharan Africa, after which they looked into the climate impacts on groundwater, taking into account the changing climatic patterns in recent years. The 14 resulting multi-decadal hydrographs and accompanying precipitation records cover a wide range of climate zones from hyper-arid to humid, as well as a diverse range of geological and landscape settings.

Most of the hydrographs indicate that higher rainfall does not necessarily equate to higher recharge values for groundwater and that aridity and episodicity play an important role in determining the amount of groundwater replenishment. In this regard, the authors highlight seasonal groundwater-level rises of varying magnitude, showing more gains than losses of groundwater during most years on record. The exceptions to this phenomenon are, however, Tanzania, Namibia, and South Africa where multi-year continuous groundwater-level declines marked by episodic replenishment events, were observed. In addition, long term rising trends observed in the hydrographs for Niger reflect increases in recharge rates after the clearance of large patches of native vegetation in the 1960s that have not yet caught up with rates of net groundwater drainage due to long groundwater response times in the area. The absence of long-term trends in other areas indicates a relatively stable balance between long-term rates of groundwater replenishment and outflow.

The researchers say that their data-driven results generally implies a greater resilience to climate change than previously supposed in many locations from a groundwater perspective. They however point out that much more observation-driven research is needed to clarify issues around the management of groundwater and to address the balance of change between groundwater and surface water resources.