Mapping the effects of drought on vulnerable populations

The greater frequency of droughts, combined with underlying economic, social, and environmental risks means that dry spells have an increasingly destructive impact on vulnerable populations, and particularly on children in the developing world. In a new study by researchers from IIASA and the University of Maryland in the US, the team set out to map at-risk populations at the global scale. 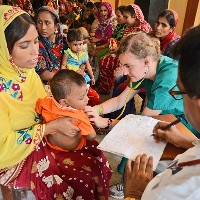 Temperature extremes and erratic rainfall patterns associated with climate change are affecting food production and infrastructure critical to food distribution, which in turn directly impact nutrition outcomes. One in nine people around the world are currently under-nourished and nearly half of the deaths in children under five are caused by poor nutrition. The burden is particularly heavy in Africa and parts of South Asia, where conflict, political fragility, and drought are more prevalent. Drought in particular, takes a heavy toll on poor communities, and especially on children in developing countries where a large part of the population’s livelihoods are dependent on subsistence farming and rain-fed agriculture. One of the consequences of poor child nutrition is stunting – in other words, impaired growth and development – which currently affects at least one in three children in these parts of the developing world.

Stunting has many adverse effects on children including a higher risk of mortality, reduced physical, cognitive, and educational attainment, and lifelong health problems from reduced immunity and increased disease susceptibility. A factor that makes addressing child stunting a critical component of sustainable development, is the fact that the effects of stunting on a population are long-term and in many cases also transgenerational, thus hampering future economic growth in populations where it is most needed. While rates of stunting have been in decline globally over the past few decades, increased climate shocks due to climate change could stall or even reverse the progress made to date. It is therefore important that populations at risk of the effects of drought be identified so that mitigation efforts can be targeted and deployed for maximum effectiveness.

Because data on stunting has been collected at fine spatial scales over decades, it is possible to explore in detail which areas are most vulnerable to climate shocks and which factors influence vulnerability. The authors of the study published in the journal Proceedings of the National Academy of Sciences of the United States of America (PNAS), however note that, while it is relatively easy to identify populations vulnerable to the climate impacts of, for instance, sea-level rise, not enough work has been done to identify populations vulnerable to the effects of drought on food availability and nutrition. According to the researchers, previous attempts to map the vulnerability of food systems did not incorporate historic observations of climate shocks and nutrition outcomes. The study improves on these approaches by using over 580,000 observations of children from 53 countries to examine how rainfall extremes have affected nutrition outcomes since 1990. This unusually large malnutrition data set was processed and analyzed in the Microsoft Azure cloud using resources provided from a Microsoft AI for Earth grant. The results indicate that rainfall extremes and drought are specifically associated with worse child nutrition, but also that these effects can be mitigated or amplified by several factors.

“We found that a number of factors can make children resilient to droughts, such as good governance, nutritionally diverse crops, higher levels of imports per capita, overall crop production, and irrigation,” explains study lead-author Matthew Cooper, who started this work as part of the 2018 IIASA Young Scientists Summer Program. “By assessing all of these factors quantitatively, we were able to identify the places that were the most vulnerable to drought. These were predominantly arid, poorly governed countries with little trade, including Chad, Eritrea, Somalia, South Sudan, Sudan, and Yemen.”

Cooper says that one of the most interesting findings of this study is that nutritionally diverse cropping systems can provide a lot of resilience. This information could help global actors like the UN Food and Agriculture Organization or the World Health Organization to get a sense of where to target aid and where populations expected to be the most vulnerable to droughts are situated. The factors that create resilience can also be useful to development practitioners and NGOs working in drought-vulnerable countries in terms of highlighting the benefits of advocating for and implementing nutritionally diverse farming systems as a way to improve drought resilience.

“Beyond being of practical relevance to development practitioners and other policymakers, this work shows how much just one of the main effects of climate change – more severe and more frequent droughts – will impact especially children in poor countries, who have not contributed to the climate change problem themselves. This is a grave injustice that needs to be addressed,” concludes Cooper.