Exposing the dirty footprint of the broken grid

A newly released report by the International Finance Corporation (IFC) shows that fossil fuel-burning backup generators in developing countries produce as much energy as 700-1,000 coal-fired power stations, consume US$50 billion in annual spending, and emit dangerous chemicals into homes and businesses. 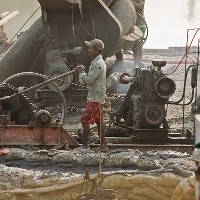 The report titled, The Dirty Footprint of the Broken Grid, is based on research undertaken by the IFC—a sister organization of the World Bank and member of the World Bank Group—in partnership with IIASA and the Schatz Energy Research Center at Humboldt State University with support from the IKEA Foundation. The Schatz Energy Research Center provided data on fuel consumption in diesel and gasoline driven backup generators that was consequently used to update inventories within the IIASA Greenhouse Gas-Air Pollution Interaction and Synergies (GAINS) model. The model was then employed to estimate emissions of health and climate damaging pollutants and to facilitate comparison across other sources and sectors. The resulting publication documents for the first time the economic, environmental, and health effects of fossil-fuel generators, and calls for the rapid adoption of clean alternatives.

Some of the key findings outlined in the report include that in developing countries, generators serve 20-30 million unique sites, producing the energy equivalent of 700-1,000 coal fired power stations. In some of these countries, backup generators provide more electrical capacity than the national power grid itself. Annual spending on generator fuel amounts to roughly US$50 billion—nearly twice the average hourly cost of grid-produced electricity. In much of sub-Saharan Africa, there is more annual spending on generator fuel than on the maintenance and management of the national grid.

The report further highlights that generators are a significant source of dangerous pollution, including sulfur dioxide, nitrous oxide, and CO2. While these chemicals are also released by cars, trucks, and motorcycles, generators are usually operated extremely close to homes, businesses, and in crowded commercial districts. The potential health impact of these “tailpipe” emissions is broad, ranging from serious respiratory illnesses to cancer. Backup generators in fact emit more than 100 megatons of CO2 into the atmosphere every year. In sub-Saharan Africa alone, the CO2 emitted by generators is equal to nearly 20% of vehicle emissions — the equivalent of 22 million more passenger vehicles on the road. The authors note that modern and cost-effective solar technology may offer developing countries a commercially viable path out of generator dependency.

“Replacing backup generators belongs in the global conversation along with efforts to decarbonize electricity grids, transportation systems, and other sectors of the economy. Their impacts highlight the importance of the quality and reliability of energy services as a critical component of access,” says Pallav Purohit, a researcher with the IIASA Air Quality and Greenhouse Gases Program. “As the cost of clean technologies continue to fall and the understanding of the welfare impacts of backup generators improves, there is an emerging and significant value proposition to replace them. Avoiding the emissions, health impacts, financial burden, and operational effort imposed by backup generators represents a potentially significant opportunity for improving the welfare of people who rely on them.”

In a statement on the release of the report, Philippe Le Houérou, CEO of the IFC noted that the private sector has an opportunity to establish a new market for modern energy access and to vastly improve economic conditions in parts of the world that still rely on inefficient electrical grids. Adopting new solar and storage solutions will however require innovative programs and catalytic finance. To address this, the Dutch Ministry of Foreign Affairs, the Italian Ministry of Environment, Land and Sea, and the IKEA Foundation are working alongside the IFC to advance solar energy services in emerging markets.

Adapted from a press release originally distributed by the IFC.