Could we cool the Earth with an ice-free Arctic?

The Arctic region is heating up faster than any other place on Earth, and as more and more sea ice is lost every year, we are already feeling the impacts. IIASA researchers explored strategies for cooling down the oceans in a world without this important cooling mechanism. 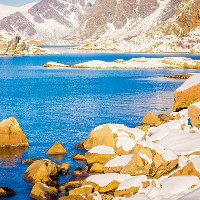 Scientists estimate that summer sea ice in the Arctic Ocean will be largely gone within a generation. This is bad news for the world, as ice and snow reflect a high proportion of the sun's energy into space, thus keeping the planet cool. As the Arctic loses snow and ice, bare rock and water become exposed and absorb more and more of the sun’s energy, making it warmer – a process known as the albedo effect.

Given that it would be very difficult to reverse this trend, even if we do manage to reach the 1.5°C target set out in the Paris Agreement, IIASA researchers explored what would happen if we were to reverse this logic and make the Arctic region a net contributor to cooling down the world’s oceans and by extension the Earth. In their new paper published in the Springer journal SN Applied Sciences, the authors analyzed what the Arctic’s contribution to global warming would be if there were no ice cover, even throughout the winter months. They also looked at ways the world could adapt to the resulting new climate conditions.

“The Arctic Ocean ice cover works as a strong insulator, impeding the heat from the ocean below to warm up the atmosphere above. If this ice layer were however removed, the atmosphere would increase in temperature by around 20°C during the winter. This increase in temperature would in turn increase the heat irradiated into space and, thus cooling down the oceans,” explains study lead-author Julian Hunt, who currently holds a postdoc fellowship at IIASA.

The first strategy entails reducing the flow of water from major rivers from Russia and Canada into the Arctic, by pumping the water to regions in the USA and Central Asia where it could be used to increase agricultural production in regions with low water availability. As a second strategy, the researchers suggest creating submerged barriers in front of Greenland glaciers to reduce the melting of the Greenland ice sheets, while the third strategy would be to pump water from the superficial Arctic Ocean to the deep ocean so that it is mixed with the more salty water below. The pumps in such a project would run on electricity generated from intermittent solar and wind sources, allowing a smoother implementation of these technologies.

The researchers’ analysis show that with an average 116 GW of energy during 50 years of operation, these strategies could reduce the salinity of the Superficial Arctic Ocean waters to 2g/l. This would increase the flow of the North Atlantic current into the Arctic and considerably reduce the ice cover on the Arctic during the winter.

Despite the concerns about the loss of sea ice in the Arctic the authors point out that there are several advantages to an ice-free Arctic scenario: Ships would for example be able to navigate through the Arctic Ocean throughout the whole year, which would reduce the distance for shipping goods from Asia to Europe and North America. In addition, the temperature in the Arctic would increase during the winter months, which would reduce the demand for heating in Europe, North America, and Asia during the winter. The frequency and intensity of hurricanes in the Atlantic Ocean could also be reduced due to the reduction in temperature in Atlantic Ocean waters. On top of this, the ice-free waters could also help to absorb more CO2 from the atmosphere.

Hunt however cautions that while there are benefits to an ice-free Arctic, it is difficult to predict what the impact will be on global sea levels, as the higher Arctic temperatures would result in increased melting of the Greenland ice sheet. It is also difficult to predict the changes in the world climate as the polar circle will be considerably weakened during the winter.

“Although it is important to mitigate the impacts from climate change with the reduction in CO2 emissions, we should also think of ways to adapt the world to the new climate conditions to avoid uncontrollable, unpredictable and destructive climate change resulting in socioeconomic and environmental collapse. Climate change is a major issue and all options should be considered when dealing with it,” Hunt concludes.