From climate change awareness to action

Awareness of climate change and its impacts is not enough to move people to action. New research on how people’s worldviews affect their perceptions and actions could help policymakers and activists reframe the discussion around climate change mitigation. 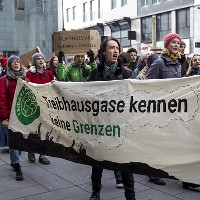 Despite a very high level of awareness of climate change and its impacts, people are often hesitant to take action to change their behavior, according to a new study published in the journal Energy and Environment.

In 2015, nations agreed to limit climate change to “well below 2°C” to avoid the worst impacts. However, in order to achieve this climate change mitigation goal, current national targets must be significantly strengthened. This requires support from the public for policy changes, which includes not only acceptance of an energy transition, but also willingness to use and to pay for renewable energy sources as well as to actively engage in an energy transition. It also requires individual behavior changes in personal consumption of energy, food, and transportation.

“The major aim of this paper was to understand how awareness about the need for climate change mitigation could be turned into action,” says IIASA researcher Nadejda Komendantova, who led the study.

To understand how people’s worldviews affect their actions, Nadejda Komendantova and Sonata Neumueller used social science methodology including surveys and interviews of people in three regions of Austria, ranging from rural to semi-rural and suburban.

“People have different ways of looking at the world, and these views influence their perceptions of risks, benefits and costs of various policy interventions and shape how people act,” says Komendantova. Using a social science rubric known as cultural theory, Komendantova and Neumueller translated their interview and survey data into four different worldviews, to categorize the types of opinions into an analyzable framework.

“Cultural theory says that there are four major worldviews and discourses: hierarchical, egalitarian, individualistic, or anarchical,” explains Komendantova. “For example, representatives of the hierarchical views would prefer the government taking responsibility for the energy transition. The egalitarian would say that everybody should be responsible for energy transition with the major arguments of fair and equal distribution of risks and responsibilities. The representatives of individual discourse would say that it is a matter of personal responsibility and that such things as technology, innovation, and compensation are important.​”

These differences in worldviews mean that although people may agree on the fundamental truth that climate change is a problem and something should be done, they may differ in how and what policies should be implemented, as well as in their willingness to change their own behavior.

This understanding could help policymakers develop compromise solutions that reflect these various worldviews.

Komendantova notes that the study was small and restricted to one country, but similar methods could provide insight across a broader European or international landscape.

“There are a variety of views on energy policy, and conflicts among these views also exist,” says Komendantova. “In order to move from awareness about climate change mitigation to action we must understand the existing variety of worldviews."