Rethinking mortality and how we plan for old age

Many people dream of comfortably living out their golden years. A new IIASA study however shows that older Europeans, and especially women, frequently underestimate how many years they have left, which could lead to costly decisions related to planning for their remaining life course. 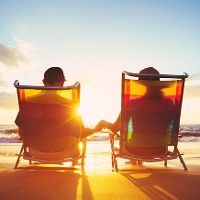 Older people have to make important decisions about their remaining life years, such as how to invest savings and manage properties, changes in employment status and retirement, living arrangements, and matters related to their health. Their personal evaluation of the length of their remaining life is therefore crucial, because decisions can be biased if this expected personal length of life differs significantly from the actual number of remaining life years, leading to negative consequences like financial strife and increased anxiety or depression.

In their study published in the journal PLOS ONE, the researchers used data from the Survey of Health, Ageing, and Retirement in Europe (SHARE) for nine European countries (Austria, Belgium, France, Germany, Greece, Italy, Sweden, Spain, and Switzerland) gathered in 2004 and 2015, to estimate subjective life expectancies from age 60 to 90 for men and women.

They compared how these results match the actual observed life expectancies in the countries included in the study. The study also for the first time highlighted these matches in terms of differences between how many years individuals thought they had left to live in 2004 compared to 2015, between countries, and in terms of differences between men and women. The results reveal one major inference that dominates across countries, time, and genders, namely that the number of years that people think they have left to live is less than their actual remaining life span. Interestingly, this downward bias was considerably larger for women when compared to men: it was close to five years in 2004 and more than three years in 2015.

One of the more surprising findings of the study was that women and men’s subjective expectations of length of life are about equal – around 19 years in 2004 and 21 years in 2015 – because women’s actual length of life is usually longer. Previous studies have made similar unexpected observations for healthy and unhealthy life expectancies with women reporting a higher proportion of unhealthy life than men, despite the fact that they live longer. This similarity indicates that health plays a primary role in the formation of personal perceptions about length of life.

In terms of differences between the 2004 and 2015 surveys in how many years people think they have left to live, the findings indicate that differences between subjective and actual life expectancies decline over time for both men and women. In the 11 years between 2004 and 2015, gender differences remained unchanged and underestimation decreased for both genders, with subjective life expectancies increasing at a higher pace than actual ones. For men specifically the difference between subjective and actual life expectancy in fact became very small – in 2015, it was only 4 months. According to the study, this could be due to an increased focus on healthy life styles with good diets, a decline in smoking and alcohol consumption, or other issues related to active aging. The authors point out that it is important to see how this tendency will develop in the future as it may hold implications for social and economic policies related to the life course of the elderly.

“The issues we highlight in this paper imply a need for adequate policies that will lead to a decrease in the downward bias people have in terms of their self-perceived life expectancy. These policies could be directed towards further improvement of information about health-related issues, so individuals will be able to construct realistic views about their health status and hence gain a more realistic view on their remaining life span. Since women have a larger bias than men, it might even be appropriate to consider gender-related policy aspects,” concludes study author Dimiter Philipov, a guest researcher in the IIASA World Population Program.