Limiting CO2 emissions is not enough, methane must also be reduced

An international team of researchers working under the auspices of the Global Carbon Project has found that global methane emissions increased by 9% (or approximately 50 million tonnes) between 2000-2006 and 2017, and that manmade emissions are responsible for the majority of this increase. 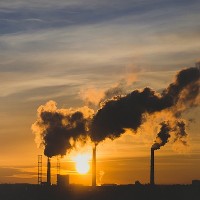 Methane (CH4) is the second most abundant anthropogenic greenhouse gas after carbon dioxide (CO2) and its warming effect is 28 times greater per kilogram than that of CO2 over a 100-year period. Since the start of the industrial revolution, atmospheric methane concentrations have increased more than two and a half times. The cause of this increase in emissions is largely linked to human activities.

After a period of stabilization in the early 2000s, international measurement networks have been observing a further and ongoing increase in methane concentrations, which started accelerating since 2014. Concentrations are currently increasing at a rate of around 8-12 parts per billion (ppb) / year. In 2017 and 2018, methane growth rates in the atmosphere were around 8.5 and 10.7 ppb / year, which makes them among the strongest years since 2000. According to a comprehensive report released by the Global Carbon Project, unless urgent action is taken to mitigate methane in the coming few years, this trend will lead us to future scenarios that are incompatible with the objectives of the Paris Agreement. The assessment outlined in the report exposes all current knowledge on each of the sources of methane, from the largest (wetlands) to the smallest (hydrates). The work called on the contributions of more than 80 scientists from various institutions, including IIASA, and integrated a large number of scientific disciplines in order to adequately deal with the wide variety of sources of methane emissions.

“Identifying the sources bottom-up and verifying these top-down through atmospheric measurements is an important first-step towards finding effective methane mitigation strategies for the future,” explains coauthor Lena Höglund-Isaksson, a researcher in the IIASA Air Quality and Greenhouse Gases Program.

The report states that around 60% of emissions are linked to human activities. The authors however point out that the value of 60% is approximate because the contributions of natural sources of methane (flooded areas, lakes, reservoirs, termites, geological, hydrates, etc.), are still relatively poorly constrained. Anthropogenic emissions however continue to increase and are distributed as follows in the global emission inventories: 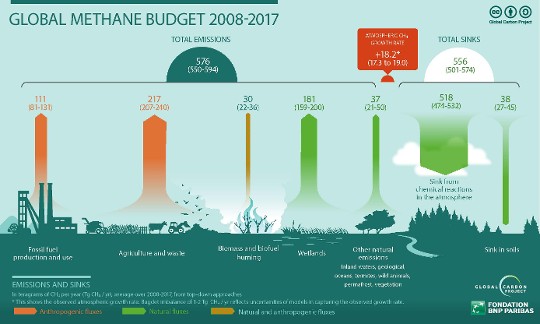 Methane emissions also differ across regions: 60% of the increase in methane emissions can be attributed to tropical regions, and the rest to mid-latitudes. In the Arctic, rising temperatures are causing the northern permafrost to melt and creating thaw lakes, which according to model results would translate into increased methane emissions in the 21st century. However, the researchers conclude that methods based on measurements of atmospheric concentrations do not yet detect a signal in this direction. The three regions mainly responsible for the increase are Africa, Asia, and China, each with an increase of 10-15 Mt. North America would contribute around 5-7 Mt, whereof 4-5 Mt originates from the United States. Africa and Asia (excluding China) are main contributors to the increase in emissions from the agriculture and waste sectors. For China and North America, growth in emissions from the fossil fuels sector is the most significant. Europe is the only region in the world where emissions seem to have decreased: between -4 and -2 Mt, depending on the estimation method used. This decrease is mainly related to developments in the agricultural sector and to the diversion of waste away from landfills.

The authors emphasize that it is important to continue to closely monitor the increase in methane concentrations in the atmosphere and to narrow down the understanding of the exact sources.

“It is imperative to continue efforts to quantify the global methane balance sheet, with the same regular intervals as for CO2, because the reduction of methane emissions can quickly benefit the climate. If we want to stay well below 2° C and meet the objectives of the Paris Agreement, we should not be content with just limiting CO2 emissions, we must also reduce methane,” concludes lead author Marielle Saunois, a researcher at the Laboratory of Climate and Environmental Sciences (LSCE, CEA-CNRS-UVSQ) in France.

In addition to the report produced by the Global Carbon Project, the work has resulted in the publication of two research papers in the journals Environmental Research Letters and Earth System Science Data.

Based on a press release prepared by the Laboratory of Climate and Environmental Sciences, France.