A renewable solution to keep cool in a warming world

Month-on-month, year-on-year, the world continues to experience record high temperatures. In response to this and exacerbated by a growing global population, it is expected that air-conditioning demand will continue to rise. A new IIASA-led study explored the pros and cons of seawater air-conditioning as an alternative cooling solution. 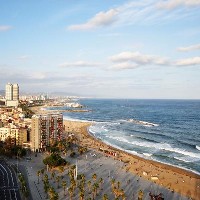 Conventional air-conditioning (AC) is the most common technology used for cooling and represents a considerable share of energy demand in warmer regions. An alternative that is not frequently considered, is seawater air-conditioning (SWAC) - a renewable alternative for cooling that involves pumping seawater from ocean depths of around 700 to 1200 meters and temperatures of 3°C to 5°C to the coast, where it exchanges heat with a district cooling system, and returns the warmer water to the ocean.

According to the study published in the journal Energy Efficiency, just 1 m³ of seawater in a SWAC plant can provide the same cooling energy as that generated by 21 wind turbines or a solar power plant the size of 68 football fields. The researchers developed a computational model and methodology to estimate the cost of cooling with SWAC around the world, and also evaluated the possibility of using this system as an alternative for energy storage from variable renewable energy sources like wind and solar.

The main potential for SWAC is on small islands in tropical regions, where the distance from the coast to the deep ocean is small, energy costs are high, and warm average temperatures are common throughout the year. For example, in Puerto Plata where the electricity costs are $0.16/KWhe, the cost of conventional AC cooling is around $0.08/KWht. The SWAC solution would cost $ 0.042/KWht, which is 48% less than conventional technologies. In Nauru, assuming the same electricity cost, the SWAC solution would be $0.0185/KWht, which is 77% lower compared with conventional technologies.

The findings further indicate that excess generation of electricity from variable renewable energy sources such as wind and solar energy can be balanced out with the variations in seawater flow in the pipeline of SWAC plants. This cold water would then be stored in thermal energy storage tanks to meet the cooling demand at any time. During months or seasons where cooling demand is low, the cold seawater can be used to increase the efficiency of a chiller to freeze sea or freshwater in the storage tanks. During the months when cooling demand is high, both the SWAC system and the energy stored as ice in the tanks can supply the cooling demand.

In addition to the above, the paper also suggests a modification to the normal design that can increase the efficiency of SWAC projects with long pipelines, while allowing for expansion to meet growing cooling demand. The proposal involves increasing the excavation depth of the seawater pump station, which allows an increase in the velocity and flow rate of the seawater inlet pipeline.

“We call this approach “High Velocity Seawater Air-conditioning”. This design configuration allows such projects to be built with an initial cooling load and expand the cooling load modularly through smaller additional capital costs,” explains study lead author Julian Hunt, who did this research during his postdoc at IIASA. 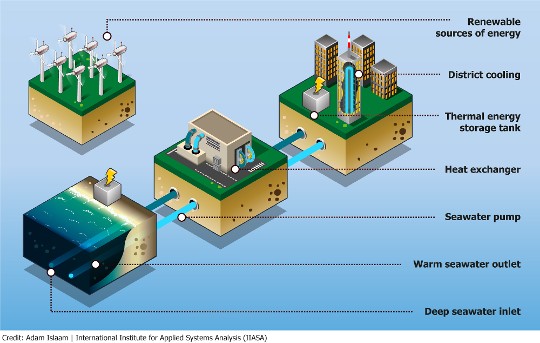 Other advantages of SWAC includes its reliability as a non-intermittent renewable source of cooling, reduction of greenhouse gas emissions from cooling processes, and the reduction of water consumption in cooling systems. In addition, it could serve as a cheap alternative for large-scale cooling in tropical countries where it could reduce the costs of food and grain storage, thus helping to lower the vulnerability of developing countries to climate change. Given the recent interest in hydrogen production and hydrogen-based economies, SWAC could even be combined with hydrogen liquefaction plants where it could help to reduce energy consumption in the process to liquefy hydrogen by up to 10%.

The researchers however caution that despite its potential and many advantages, this technology also has challenges. The return of the seawater should, for instance, be handled with extreme care to minimize its impact on coastal wildlife; retrofitting district cooling infrastructure and buildings could incur high capital costs; and there is a risk of thermal shock and increased nutrient loading in the deep seawater outlet.

“While it does have its challenges, seawater air-conditioning is an innovative and sustainable technology that has great potential for expanding into a benchmark system for cooling in tropical locations close to the deep sea and will help fulfill our cooling needs in a warming world,” Hunt concludes.