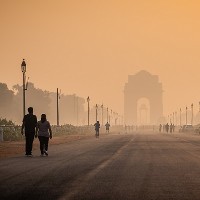 The experiences of three cities – Beijing, Delhi, and Mexico City – offers some lessons on how governments can tackle the growing challenge of air pollution. Notably, there is no silver bullet, and air pollution can only be tackled through sustained political commitment.

The World Bank report takes up findings from an independent study by IIASA and the Council on Energy, Environment, and Water (CEEW), demonstrating that a significant share of air pollutant emissions in India still originates from sources associated with poverty and underdevelopment such as solid fuel use for cooking, poor waste management practices, and crop residue burning. Consequently, while pollution levels are high in urban areas (Indian cities are among the most polluted in the world), the sources and solutions are only partly within cities. A joint study, conducted by IIASA and the National Environmental Engineering Research Institute (NEERI) in Nagpur (India), found that nearly 60% of pollution in Delhi is caused by fine particulate matter (PM2.5) that originates from outside.

“Pollution from rural areas is transported into the cities (and vice versa), where it constitutes a significant share of pollution making the coordination of urban-rural and inter-state responses critical. This creates a challenge for many state and city governments since some of the important emission sources (e.g., crop burning) are outside of their immediate jurisdiction,” explains IIASA researcher Pallav Purohit.

In direct response to the growing body of evidence in this direction pioneered by this study, the Indian government recently established a Commission for Air Quality Management in the national capital region and adjoining areas for cooperation between the states surrounding Delhi.

The IIASA Air Quality and Greenhouse Gases (AIR) Program has a long-term collaboration with the World Bank on identifying cost-effective strategies for air quality management in China, India, and more recently for the Greater Johannesburg Metropolitan Area in South Africa and Hanoi in Vietnam within the World Bank’s Pollution Management and Environmental Health (PMEH) Program.

Jostein Nygard of the World Bank emphasizes that the collaboration with IIASA in tailoring the IIASA Greenhouse Gas and Air Pollution Interactions and Synergies (GAINS) model to local conditions have been instrumental in developing and applying systematic air quality management planning in some of the most polluted regions of the World, like in the North China Plain and the Indo-Gangetic Plain. Through this collaboration, good conditions for air quality management has been established and in several locations, like in China, substantive improvements in air quality have already been made by ensuring cost-effectiveness and effective airshed management planning (a collaborative approach to air quality management usually involving a variety of stakeholders), addressing all relevant pollution sources.

The AIR program is also collaborating with several partners in Japan, supported by the institute’s Japanese National Member Organization (NMO), The Japan Committee for IIASA, on a project titled “Interactions between urban and rural air pollution in Asia, and the multiple development benefits of coordinated action”. The project is further supported by the institute’s Vietnamese NMO, the Vietnam Academy of Science and Technology (VAST), in terms of the development of the GAINS model for Vietnam. Finally, the AIR Program is also involved in the Welcome Trust funded project “Complex Urban Systems for Sustainability and Health (CUSSH)” that will deliver key global research on the systems that connect urban development and health in individual cities.