While many people are now enjoying longer, healthier lives, current retirement ages are posing challenges for both policymakers and retirees. A new study looked into whether there is potential to increase the retirement age based on the relationship between working life expectancy and health aspects important for work ability for women and men in Europe. 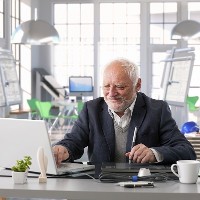 Life expectancy has steadily been increasing in many countries around the world due to, among others, advances in healthcare and people adopting healthier lifestyles. At the same time, fertility has been declining or stabilized at low levels, leading to a marked increase in the share of older adults in these populations. This situation poses a risk to financial sustainability in several areas of social security systems, one of them being pension systems, as most European countries provide public pensions to their citizens. Retirement ages and measures to support longer working lives are being widely discussed at the country, as well as the European Union level, and many countries have already initiated and passed policy changes to gradually increase the official retirement age. One pertinent question that has however surfaced in this context is how large the potential is to increase working lives further given people’s health status.

In their study published in the European Journal of Aging, IIASA researcher Daniela Weber and Elke Loichinger from the Federal Institute for Population Research in Germany investigated whether there is potential to generally increase the retirement age. They based their analysis on the relationship between working life expectancy and three health expectancies that represent health aspects important for work ability and employability between ages 50 and 59, as well as ages 60 and 69 for women and men in Europe.

“There are several studies on the relationship between retirement and health on the individual level, but studies on the population level are rare and we were surprised to find that differences in health and working life expectancies had not been quantified before. We wanted to see how large the potential is to increase working lives further, given people’s health status and also how this potential differs between men and women for different age groups and between different socioeconomic groups,” explains Loichinger.

To this end, the researchers analyzed the relationship between working life expectancy and health expectancy, differentiating between three health dimensions, namely physical health, cognitive health, and general health. Moreover, they analyzed heterogeneity in working life expectancy and all three health outcomes by education. The analysis specifically focused on age groups 50-59 and 60-69 as those are, and will continue to be, most affected by future increases in retirement ages.

“The heterogeneity between education groups in terms of health and the ability to work beyond currently observed labor market exit ages has to be taken into account when working lives are being extended. Our results indicate potential to extend working lives beyond current levels. However, significant differences in the expected number of years in good health between persons with different levels of education require policies that account for this heterogeneity,” Weber concludes.