A dance theater performance explores the current debate on migration through the lenses of diverse and often conflicting worldviews. 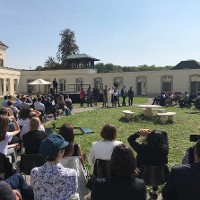 Under the auspices of the Austrian Presidency of the Council of the European Union, IIASA, in collaboration with the European Commission's Joint Research Centre (JRC), the International Network for Government Science Advice (INGSA), and the Global Young Academy (GYA), hosted a three-day summer school from 5-7 September, bringing together researchers and policymakers from over 40 countries  to learn how to optimize the use of scientific evidence in policy making.

The Summer School  focused on the theme of migration and demography – specifically the role of population and migration for sustainable development in the European Neighbourhood - a key strategic area for the future of Europe.

The opening session on Wednesday, September 5th culminated in a dance theatre performance by 4 artists and 13 IIASA scientists. They tackled the current debate on migration through the lenses of diverse and often conflicting worldviews. The audience was then led through a solution finding process with the goal being to reach an agreement despite deep-rooted differences.

A  case study and video on the production is available here.

Dance and science: A graceful partnership for change

The Mellon Summer School for Performance Research at Harvard University