Nocturnal luminosity implies that North Korea's economy is poorer, more volatile and more vulnerable to weather that formerly thought according to an article in The Economist. 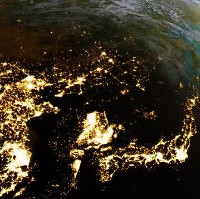 In a recent article published by the Economist, ESM-EOCS Researcher Scholar's Olha Danylo and Juan Carlos Laso Bayas contributed to the analysis of nighttime light data.

"Viewed from space at night, North Korea looks like the recently released first image of a black hole: an abyss, ringed by the brilliant glow of South Korea, China and Russia, from which nothing can escape. But the Hermit Kingdom does emit a bit of light, which orbiting satellites detect. And nocturnal luminosity is one of the few reliable sources of information about the country. It implies that North Korea’s economy is poorer, more volatile and more vulnerable to weather than formerly thought".  The Economist

We use earth observation and citizen science to conduct research and provide innovative, cost effective and high quality data, tools and services to help society achieve the sustainable development goals