A general equilibrium model to assess China’s agricultural prospects and challenges up to 2030, covering national, regional and county level. 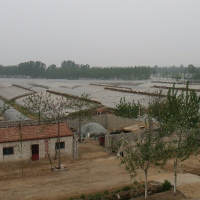 © Chinagro project team | A lake of greenhouses in a Shandong village

The CHINAGRO Model was developed to help identify the most effective policies to tackle China’s agricultural challenges. It can be used to analyze potential policy impacts on different parts of China and is the most detailed model of Chinese agriculture currently available. The model provides informative analysis down to county level and helps researchers analyze consumer and producer behavior, government policies, and markets.

The model was developed to analyze and test policy options for managing China’s agricultural challenges. These challenges resulted from the fast growth of consumption in China, meat in particular, which increased China’s dependence on international markets and triggered intensification and concentration of domestic production.

The CHINAGRO model has been developed over a series of projects since 2001. It was developed by IIASA researchers and other seven research partner institutions.

Chinagro-II is a 17-commodity, 8-region general equilibrium welfare model. Farm supply is represented at county level (2,885, virtually all), and accommodates for every county outputs of 28 activities and 9 land use types and livestock systems. Consumption is depicted at a regional level, separately for the urban and the rural population, each divided into three income groups, and domestic trade is interregional.

The model describes the price-based interaction between the supply behavior of farmers, the demand behavior of consumers, and the trade flows connecting them. Farmers maximize their revenue by optimally allocating labor and equipment to cropping and livestock systems, at exogenously specified land resources, stable capacities, and levels of technology, while taking the buying and selling prices in the county as given. In addition to purchased inputs, local inputs such as crop residuals, grass, organic manure, and household waste contribute to the production process. Consumers maximize their utility, at given prices, by optimally allocating their expenditures according to a utility function that is quasi-linear, that is, linear with a unit coefficient in part of non-food consumption and obeying a linear expenditure system in food commodities and the remainder of non-food consumption. Trade between regions in China and with the rest of the world is cost minimizing at given world prices and import and export tariff rates. The impact of China’s imports and exports on the world market is assessed by coupling Chinagro-II and the GTAP-model of world trade. Through its significant geographic detail, the model can incorporate location-specific information on climate, resources, and technology while its equilibrium structure enables it to represent coordination flows among the various agents and describe market clearing at different levels. 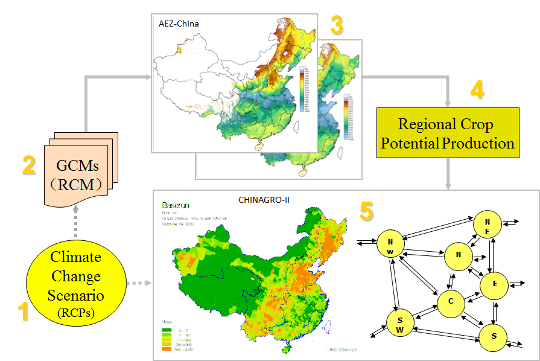 Schematic of the CHINAGRO II model 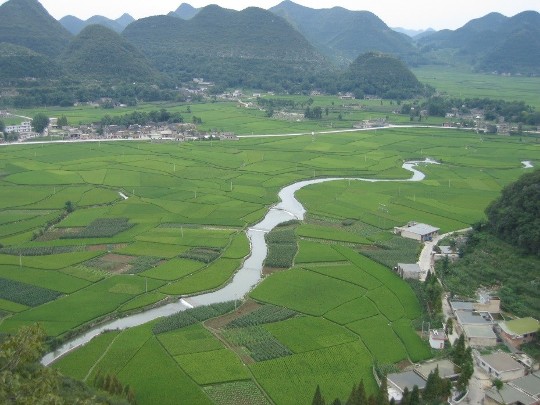