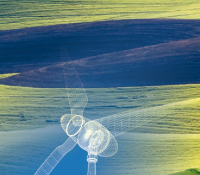 In December 2013, the European Commission proposed a new air pollution control policy—the most stringent ever. Over the next two to three years, the European Parliament and member states will negotiate the details and come to consensus, eventually ratifying it into law.

While Europe’s air is cleaner than in the past—and far cleaner than many other regions of the world—air pollutants such as fine particles, soot, and ozone still cause major damage to health, infrastructure, and the environment. Particulate air pollution and ozone cause cardiac and lung disease and contribute to an estimated 420,000 premature deaths each year in the European Union. And excess nitrogen constitutes a widespread threat to biodiversity, especially in nature protection areas, by influencing plant species composition.

European Commission Environment Commissioner Janez Potocˇnik lauded the new proposal, saying, “The actions we are proposing will halve the number of premature deaths from air pollution, increase protection for the vulnerable groups who need it most, and improve quality of life for all. It’s also good news for nature and fragile ecosystems, and it will boost the clean technology industry—an important growth sector for Europe.”

“What’s new about this policy is the integrated view it takes,” says IIASA Mitigation of Air Pollution and Greenhouse Gases Program Director Markus Amann. “It is really a systems perspective that capitalizes on the connections to other policy areas.”

To support the policy development process which ran over the last five years under IIASA leadership, institutions around Europe combined their research models of sectors including agriculture, energy, transport, and more. The project, called the European Consortium for Modelling of Air Pollution and Climate Strategies (EC4MACS), worked sort of like a policy‑assessment factory, where each model was connected to the others so that all the important linkages between sectors could be accurately assessed. IIASA’s Greenhouse Gas and Air Pollution Interactions and Synergies (GAINS) model was the framework that tied everything together.

The result is that the new proposal focuses greater attention on pollution from agriculture and small woodstoves. Amann explains, “It draws attention to sectors which have been overlooked in the past, where measures are now much more cost‑effective than further emission reductions from sectors which have contributed a lot in the past in terms of emissions reductions, such as power plants and transportation.”

The new air policy proposal also for the first time includes methane, to limit its contribution to hemispheric background of ground‑level ozone. As methane also constitutes an important greenhouse gas, the proposed measures would deliver clear co‑benefits for both air and climate policies. 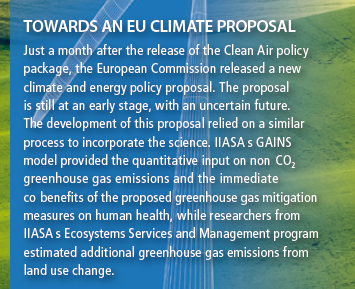 The policy assessment process included consultations with policymakers at every step. IIASA researchers met with government representatives to assess their emissions data. They talked to policymakers to determine what information was needed, and they shared draft assessments for comments and feedback, running further analyses based on questions that came back from the policymakers.

That back‑and‑forth has led to an evolution in the way IIASA researchers communicate their results to policymakers—one reason that the scientific reasoning has been taken up by policymakers to a large degree, says Amann.

“In the past when we quantified the costs of policy action, we could not really compare these on a solid basis with the benefits. And if you’re just looking at costs here’s not strong criteria to argue for more stringent measures,” says Amann. “Here we managed to make a strong case about the health benefits. These couldn't be discounted.” By assessing health and other benefits from an economic standpoint, the researchers could show much more concrete benefits to reducing air pollution—the evidence that policymakers needed to support action.

“Science really came in and changed the outcome. What was proposed in the end was not much different than what the scientific analysis suggested,” says Amann. As the EU parliament and member states now work towards a consensus, the consultations will continue. Over the next six months, 22 countries will send representatives to IIASA to consult on emissions data and ask questions about the analysis. Amann says, “This means that the discussion will not be
derailed by technical details, but can focus on ambition levels, willingness to pay, and the value of clean air.”

IIASA and the EU climate proposal

European Consortium for Modelling of Air Pollution and Climate Strategies