The articles in the latest issue of IIASA's bi-yearly magazine Options show the value of looking “between the lines” to find lasting solutions to the major challenges facing our world. 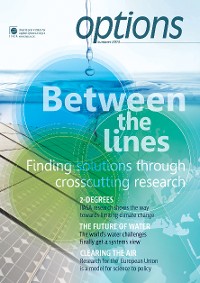 Only systems research is capable of resolving the complex problems confronting us today. The way we manage freshwater affects the quantity and quality of food that we produce. Meeting our energy needs for  development directly impacts  human and environmental well-being.

Options magazine lays out the current advances in international systems research, as practiced at IIASA for four decades.  It is recommended reading  for the growing number of researchers, business leaders, policymakers, and educators, who not only recognize the value of systems thinking but want to learn more about it.

August 2013: Options Magazine, Summer 2013.Landslides represent a major threat to human life, property, and the environment. By undertaking landslide hazard and risk assessments to, for example, identify high-risk areas, authorities aim to improve the management of landslide hazard risk. But could a decentralized risk assessment system work better than a centralized one?  More

July 2013: Options Magazine, Summer 2013.Critics of energy subsidies in developing countries argue they cost too much, encourage wasteful consumption, and increase greenhouse gas emissions without providing intended benefits to the poor. Recent research by IIASA’s Narasimha Rao suggests that calls to phase out kerosene subsidies may be premature.  More

July 2013: Options Magazine, Summer 2013.As the world’s population grows, one of the fundamental questions is how to feed the millions more people that will soon inhabit this planet.  More

IIASA and the private sector

July 2013: Options Magazine, Summer 2013.While connections between air pollution, climate change, and human and environmental health are intuitive, what has been missing is a systematic way of linking together all aspects of the environment and society to anticipate the impact that policies in one area may have on another region or sector.  More

Assessing the future of water

Interested in subscribing to Options or other IIASA publications?