Options Summer 2019: Q&A with William Nordhaus, recipient of  the 2018 Nobel Prize in Economics. 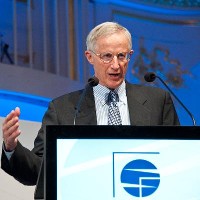 A: At the time, I was a young economics scholar at Yale doing various kinds of economic and energy models. There was an extraordinary group of people at IIASA, including Tjalling Koopmans, Alan Manne, and Howard Raiffa – it was a great place to spend a year. At IIASA, I shared an office with a climatologist named Allan Murphy from Oregon State University. He asked me: “Do you know about climate change?” I answered: “Well, a little bit, not much.” So that's how it all got started. I had a self-study project to learn about the interaction of economics, energy systems, and climatology. I modified the energy model that I had developed to include greenhouse gas emissions and the carbon cycle. It was the first attempt to integrate economics, energy systems, and climate change into what we now call an integrated assessment model.

Q: That became the “Can we control carbon dioxide?” 1975 working paper?

A: Yes. As an aside, the American Economic Review, the flagship journal of economics that publishes the Nobel essay each year, may publish that paper now as a companion.

Q: How was that paper first received?

A: Initially, it got a mixed reaction. Some people thought it was weird, irrelevant, and maybe even funny. Then, after a few years, the issue became more of a national and international priority and eventually, it ended up in Stockholm.

Q: What has your work since revealed about the relationship between economic growth, energy use, and environmental consequences?

A: If we go about slowing, or even reversing, climate change to one of the targets, such as 1.5 or 3°C, and we do it in an efficient way, the penalty to our living standards will be small. That’s the main lesson. We need to find the right instruments and apply them in a gradual, appropriate way, with very high participation from different countries. The second lesson is about international cooperation. We’ve basically made no progress in devising mechanisms to bring nations together. I think we have the wrong model in mind and we are going down the wrong road on international agreements. Moreover, we now know that raising the price of emissions of carbon dioxide and other greenhouse gases is a central part of any mechanism.

Q: In what ways was IIASA the right institution to support your first foray into the integration of climate, energy, and economic models?

A: There's no doubt in my mind that if I hadn't gone to IIASA, I wouldn't have done the work I did. It was the catalytic process of being in a pure research environment – no teaching, no administration – with scholars and researchers who were interested in a wide range of methodologies. Meeting the people I did was also absolutely critical: people interested in economics, algorithms, climatology, energy, technology, and willing to support new ideas.