Options Magazine Winter 2016: Investor's views of risks influence how much they are willing to contribute to financing new renewable energy projects, according to IIASA research in North Africa. 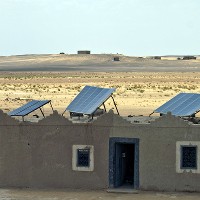 Solar power in North Africa could provide a valuable source of renewable energy but investors’ risk perception can lead to higher costs of developing such projects.

Deployment of concentrated solar power (CSP) facilities is expensive, requiring extensive initial investment. Investors’ subjective judgments about the severity and probability of risk and how much they are willing to accept can translate to a higher cost.

To investigate the relationship between investor risk perception and increased costs, IIASA researchers Nadejda Komendantova and Thomas Schinko studied how different risk categories influenced the overall cost of capital for CSP in Algeria, Egypt, Morocco, and Tunisia. The team then analyzed how a de‑risking approach—removing the costs of potential risks—would impact the cost of electricity from CSP in the North African region, using a levelized cost of electricity (LCOE) model.

The researchers found that if the risks of investing in CSP in this region were on a par with other energy investments, the mean LCOE would be 39% lower. However, this reduction would still not be sufficient for CSP to be financially competitive with highly subsidized conventional electricity from fossil fuels in North Africa.

“Our results suggest that de‑risking is an important strategy to foster deployment of CSP in North Africa but additional measures to support renewable energy sources, such as reconsidering fossil fuel subsidies, will be needed,” Komendantova says.

Another record-breaking year for renewable energy