Excess NOx emissions from diesel engines have been linked to approximately 38,000 premature deaths worldwide in 2015—mostly in the European Union, China, and India. 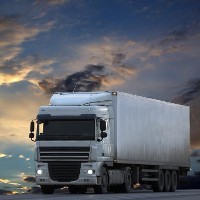 Nitrogen oxide (NOx) emissions from diesel cars, trucks, and buses are a major contributor to air pollution-related deaths worldwide—and the impacts are increasing, despite regulatory limits. Since 2015, revelations that Volkswagen and other manufacturers used “defeat devices” to hide from regulators the fact that their diesel cars were emitting too much NOx helped to heighten public awareness of the problem. But this is not just a defeat device problem. Both light-duty and heavy-duty diesel vehicles emit more NOx in on-road driving conditions than during laboratory certification testing, for reasons that may range from details of the engine calibration to equipment failure, inadequate maintenance, tampering by vehicle owners, the deliberate use of defeat devices, or simply deficient certification test procedures.

Solid quantitative data about the effects of diesel vehicle excess NOx emissions, both in terms of public health and environmental impacts, have been lacking—until now. A study published today in Nature examined 11 major vehicle markets representing more than 80% of new diesel vehicle sales in 2015 (Australia, Brazil, Canada, China, the EU, India, Japan, Mexico, Russia, South Korea, and the USA) and found that those vehicles emitted 13.2 million tons of NOx under real-world driving conditions—that’s 4.6 million tons more than the 8.6 million tons expected given the vehicles’ performance under official laboratory tests. 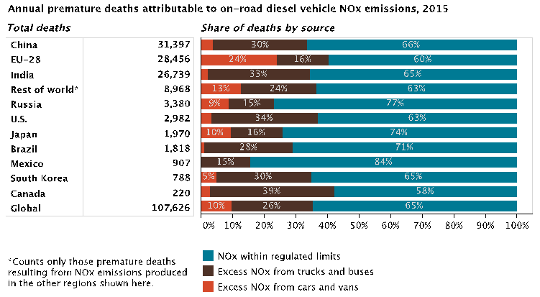 “Heavy-duty vehicles—commercial trucks and buses—were by far the largest contributor worldwide, accounting for 76% of the total excess NOx emissions. And just five markets (Brazil, China, the EU, India, and the USA) produced 90% of that. For light-duty vehicles—passenger cars, trucks, and vans—the European Union produced nearly 70% of the excess diesel NOx emissions,” says Josh Miller, researcher at the International Council on Clean Transportation (ICCT) and co-lead author of the study.

“While globally, the on-road diesel vehicles contribute over 20% of total NOx emissions, in several regions their share is much larger--in the EU this exceeds 40%, nearly half of which is due to poor enforcement of existing standards. This level of emissions could also threaten the achievement of other environmental targets, which assume compliance with stricter emissions standards,” says Klimont.

NOx is a key contributor to outdoor air pollution in the forms of ground-level ozone and secondary fine particulate matter (PM2.5). Long-term exposure to these pollutants is linked to a range of adverse health outcomes, including disability and years of life lost due to stroke, ischemic heart disease, chronic obstructive pulmonary disease, and lung cancer—particularly in sensitive populations such as the elderly, who are at higher risk of chronic disease. The study combined results from in-use vehicle emissions testing studies with global atmospheric modeling, satellite observations, and health, crop yield, and climate models to estimate the damages caused by diesel NOx emissions.

The study estimates that excess diesel vehicle NOx emissions in 2015 were linked to ~38,000 premature deaths worldwide—mostly in the European Union, China, and India. “The consequences of excess diesel NOx emissions for public health are striking,” says Susan Anenberg, co-lead author of the study and cofounder of Environmental Health Analytics, LLC. “In Europe, the ozone mortality burden each year would be 10% lower if diesel vehicle NOx emissions were in line with certification limits.”

At a global level, the study projects that the impact of all real-world diesel NOx emissions will grow to 183,600 early deaths in 2040, unless governments act. In some countries, implementing the most stringent standards—already in place elsewhere—could substantially improve the situation, according to the researchers. “Globally, the single most important action to reduce the health impacts of excess diesel NOx emissions is for countries to implement and properly enforce a Euro VI tailpipe emission standard for heavy-duty vehicles. Combined with strengthened compliance for light-duty vehicles and next-generation standards, this would nearly eliminate real-world NOx emissions from diesel vehicles, which would avoid 174,000 air pollution-related deaths and 3 million years of life lost worldwide in the year 2040,” says Ray Minjares, co-author and Clean Air Program Lead at ICCT.