The Intergovernmental Panel on Climate Change (IPCC) has published its Special Report on Global Warming of 1.5°C, a new assessment on minimizing global warming, and multiple IIASA researchers were involved in its production. 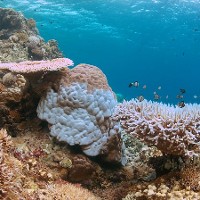 The report was approved by the IPCC at a meeting on 6 October in Incheon in South Korea and highlights the strong benefits to humanity and ecosystems of keeping global warming to 1.5°C above pre-industrial levels, rather than 2°C. Governments will meet in Poland in December for the 24th Conference of the Parties (COP24) to review the Paris Agreement to tackle climate change, and the special report will provide important scientific input.

The world is currently on track for 3-4°C of warming, far off the Paris Agreement targets. If climate change is limited to 1.5°C, rather than 2°C, the global sea level rise would be 10cm lower, hundreds of million fewer people would be exposed to severe heatwaves, ocean acidification would be reduced, protecting the ecosystems, and irreversible impacts on polar ice sheets would be avoided.

“Already we see the serious consequences of a 1°C warming, such as increased extreme weather events, sea level rise and effects on important terrestrial and oceanic systems. However, the report also shows that at 1.5°C and beyond some systems would be reaching the limits of adaptation, for example, the loss of 70-90% of tropical coral reefs by mid-century under the 1.5°C scenario, with a total loss under 2°C scenario,” says Reinhard Mechler, deputy program director of the Risk and Resilience Program.

IIASA Energy Program Director Keywan Riahi says: “The report clearly shows that achieving the 1.5°C target is still possible, if rapid and stringent action is introduced. It will however not come for free as substantial upscaling of investments into clean energy by more than a factor of four is needed by 2050 compared to 2015.”

Such actions would cover almost every aspect of life, including the use of clean energy sources such as renewables, sustainable agriculture and diet changes, CO2 removal technologies and energy efficiency. Emissions will need to fall by about 45% by 2030 compared to 2010 levels.

In support of the IPCC assessment, IIASA signed a memorandum of understanding with the Integrated Assessment Modeling Consortium (IAMC) and the IPCC Working Group III to develop and host the IAMC Scenario Explorer, a database of emissions pathways which critically underpin the conclusions of the Special Report.

The development of the database was led by IIASA researcher Daniel Huppmann. Among the many scenarios four illustrative pathways were highlighted by the report. IIASA researchers were involved with the development of all four, and led the development of two of them – the Shared Socioeconomic Pathway 2 (SSP2) and the Low Energy Demand (LED) Scenario. Huppmann and the team collected the scenarios in a central database and used a number of models to project how the climate might change in the future and provide the insights for the report. It will also be extended for the IPCC Sixth Assessment Report (AR6).

The database will be publicly launched on 15 October in the interests of transparency. The data within can be downloaded, manipulated, and assessed by other researchers to understand how the special report insights were derived.

More than 6,000 scientific references were cited in the report. Writing the report involved 91 authors from 40 countries and 133 contributing authors, 12 of whom are from IIASA.

Joeri Rogelj, a researcher in the Energy Program, was a coordinating lead author on the report, while Sabine Fuss, a guest researcher in the Ecosystems Services and Management Program, Mechler, and Riahi are all lead authors. Various other IIASA researchers are listed as contributing authors or chapter scientists, including Thomas Gasser, Peter Greve, Lena Höglund-Isaksson, David McCollum, Simon Parkinson, Pallav Purohit, and Wenji Zhou.

Rogelj, Mechler, Riahi, Fuss, and Huppmann were also part of the team of drafting authors for the ‘Summary for Policymakers’, providing the main messages of the full report.

“The report for the first time presents a systematic assessment of the implications of mitigation for the UN Sustainable Development Goals (SDGs),” says Riahi, who coordinated the assessment of mitigation-SDG implications together with Joyashree Roy from Jadavpur University in India. “This is where the report goes beyond the Fifth Assessment Report (AR5), highlighting, for example, critical benefits from limiting energy demand in order to maximize synergies and to avoid tradeoffs with the SDGs.”

Riahi, Rogelj, and Fuss were three of the representatives of the author team that met with the government delegations in Incheon to approve the final report, the full name of which is Global Warming of 1.5°C, an IPCC special report on the impacts of global warming of 1.5°C above pre-industrial levels and related global greenhouse gas emission pathways, in the context of strengthening the global response to the threat of climate change, sustainable development, and efforts to eradicate poverty.

“We at IIASA are extremely proud of the contributions our IIASA scientists are making to the ongoing IPCC efforts to strengthen the global response to the threat posed by climate change. In addition to the scientific contributions that IIASA scientists continue to make in this space, IIASA is also the primary data custodian for the IPCC efforts and models. Long may this productive relationship continue for the benefit of humanity,” says Albert van Jaarsveld, IIASA Director General and CEO.