The
plus side of population aging

An aging society will have numerous benefits, according to new research from the International Institute for Applied Systems Analysis (IIASA) and researchers in Germany and the United States. 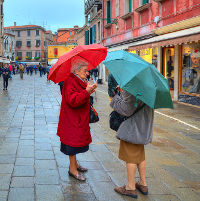 Around the world, people are living longer and having fewer children, leading to a population that is older, on average, than in the past. On average, life expectancy in developed countries has risen at a pace of three months per year, and fertility has fallen below replacement rate in the majority of Europe and other developed countries.

Most academic discussion of this trend has so far focused on potential problems it creates, including challenges to pension systems, economic growth, and healthcare costs.

But according to a new study published today in the journal PLOS ONE, population aging and the compositional change that go along with it—such as increasing education levels—may  turn out to have many positive impacts for society.

“In order to give a more complete picture of population aging, it is necessary to include both positive and negative effects of population aging,” says IIASA researcher Elke Loichinger, who wrote the article in collaboration with researchers from the Max Planck Institute in Rostock, Germany, and the University of Washington.

The researchers chose to use Germany as a case study because the country is at an advanced stage of the demographic transition, with a current fertility rate of around 1.4 and the second oldest average population in the world (median age 44.3 years). They identified five areas in which population aging could bring net benefits, when considered in combination with other demographic factors:

While the study focused on Germany, the researchers say that the findings are applicable across many aging societies. Loichinger says, “The particular context of another country will determine the degree of their relevance. For example, an increase in educational attainment levels can be found almost universally around the globe, and the finding that the elderly belonging to subsequent cohorts have better health has also been shown in other contexts. Depending on a country’s stage in the demographic transition process, the results from the analyses of bequests and CO2 emissions are also generalizable.”

The study provides a new perspective at a time when population aging is spreading to many countries around the world. Loichinger says, “The extent of population aging that is going on and expected is beyond what has ever been observed before. Since there is no precedent to this development, there is also no blueprint how to deal with it.”

Gender disparities in cognition will not diminish