Options Winter 2018/19: The world’s forests are in serious trouble. IIASA researchers are exploring approaches for protecting the environment and ensuring the sustainable management of this important resource. 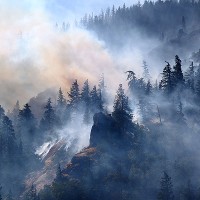 Climate change represents a significant threat to the world’s forests. Increased extremes, such as long and severe heat waves and water stress due to a lack of, or uneven distribution of rainfall, is leading to a decline in the resilience of forest ecosystems, and sometimes causes explosive surges in natural disturbances such as fire and pest outbreaks.

The past summer saw extreme heat waves throughout the northern hemisphere. With the dry air and vegetation came an unusually large number of wildfires in many countries. In Greece, dozens of people were killed in the worst wildfires in a decade, while in Sweden wildfires reached as far as the Arctic Circle, and in the United States, massive amounts of land burned down, particularly in the west of the country. Most of these fires were forest fires.

While there is no one factor responsible for the mega-fires, the warmer average temperatures and more extreme weather connected to climate change lengthen fire seasons and lead to an expansion of fire-prone areas. This in turn causes more frequent, extensive, and severe fires. IIASA research shows that due to climate change, the burned areas in Europe and boreal Eurasia could triple by 2090 compared to their mean value between 2000 and 2008 if no action is taken.

In densely populated areas, 90% of fires started because of human activity are extinguished almost “immediately” because good infrastructure is in place. In remote areas, where capacity to control fire outbreaks is low however, fires set by humans can lead to devastating disasters. In distant areas without human activity, fires are ignited by lightning and can burn for weeks or even months on end.

Once a fire has started, how big it gets, and for how long it burns, depends on many factors, for example, whether wind favors the spreading of flames, how much dry vegetation is available as fuel, and what resources are available to extinguish it. All of these factors are included in the Wildfire Climate Impacts and Adaptation Model (FLAM) developed in the IIASA Ecosystems Services and Management Program. 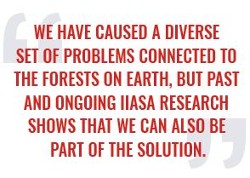 Recently, the researchers applied their model to Indonesia, which is extremely affected by long and severe wildfires, partly due to the common practice of using fire for land clearing. The model was able to capture burned areas very well, especially for large fires. “Finding the areas that are particularly prone to wildfires will help policymakers to implement strategies for fire prevention and provides important information for building a cheap and efficient fire response infrastructure,” explains IIASA researcher Andrey Krasovskii.

Public debate often focuses on the reduction of carbon emissions from the burning of fossil fuels, but in fact, Indonesia’s emissions due to the burning of forests on large peat areas are comparable to the annual fossil fuel CO2 emissions of countries such as Japan and India. This shows how crucial forests are for our climate, and that large fires can easily turn them from CO2 sinks to emitters.

The threats that forests face due to climate change go way beyond wildfires. Climate warming is most extreme in the circumpolar boreal belt – the northernmost regions of Alaska, Canada, Russia, and Scandinavia. These areas are home to the boreal forests, which make up the largest ecosystem in the world, apart from the oceans, and comprises one third of all forests globally. Consisting mostly of coniferous species, these forests are shaped by their adaptation to a cold climate and depend on it crucially, which makes them particularly vulnerable to climate change.

IIASA researchers have intensively studied boreal forests for the last three decades. In September, the institute in collaboration with the International Boreal Forest Research Association, the Pan-Eurasian Experiment, and the International Union of Forest Research Organizations hosted a conference called "Cool forests at risk?" to find sustainable solutions for preserving this important ecosystem.

This event was not just a conference, but also the start of a collective effort by scientists, forest managers, and other stakeholders to protect boreal and mountain forests and raise public and professional awareness for the danger they face. “We hope that the knowledge we generate with our research, diversity of topics, and depth of discussions at the conference will help countries with cool forests transition to an adaptive, risk-resilient sustainable forest management,” says conference chair and IIASA researcher Florian Kraxner.

Sustainable forest management however, does not just include the protection of forests against the effects of climate change, but also the regulation of deforestation, the most obvious danger that forests face due to human activity. The core of the problem is quite simple: Because we can make money by cutting down trees for lumber or paper products, we are exploiting forests faster than they can regenerate. Unfortunately, that does not make the problem easier to solve. This is why the Equitable Governance of Common Goods project combined the expertise of the IIASA Risk and Resilience and Evolution and Ecology Programs to find out which types of regulations work best to ensure fair sharing of resources and prevent the so-called ‘’tragedy of the commons’’ – the collapse of a resource due to the self-interested behavior of individuals.

One approach to finding these solutions is to use experimental games, like the “Forest Game” that was developed at IIASA. In the game, a group of five to ten players is asked to make decisions, over several rounds, about the management of a forest. Analyzing the players’ decision-making process helps the researchers find out what role communication and personal values play in resource governance.

We have caused a diverse set of problems connected to the forests on earth, but past and ongoing IIASA research shows that we can also be part of the solution. This gives rise for hope that we will be able to preserve the forests we so heavily depend on for our climate, economy, and biodiversity.

Alleviating the tragedy of the commons