Financial risk in the spotlight 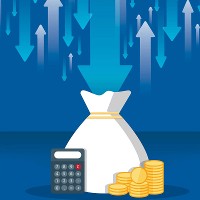 When floods rise from the New Meuse River in Rijnmond- Drechtsteden, Rotterdam, homes and businesses are at particular risk. Not only do they lie outside the Dutch city’s protective dyke system, but many are uninsured because premiums are expensive.

Mathematicians have however found that high premiums are unnecessary. According to Yuri Ermoliev, a researcher in the IIASA Advanced Systems Analysis (ASA) Program, insurance companies could lower their prices, safeguard citizens from catastrophic losses, and still make a profit.

Research shows that if you plot size of loss against frequency, the result is not a normal bell curve but a distorted one with a “fat tail”. Insurers need the right tools to deal with fat-tailed risks. The commonly used approach is “annual average loss”, which suits frequent, low-consequence risks like car accidents, but can’t tackle the peculiarities of occasional catastrophes.

“It is like planning for a trip where the temperature will mostly be -10°C but there’s a chance it could fall to -50°C,” explains ASA Program Director Elena Rovenskaya. “If you make clothing decisions based on an averaged temperature it could be disastrous”.

Ermoliev and his colleagues separated out high risk, unlikely scenarios in the fat tail and treated them differently, allowing premiums to be calculated in a more sophisticated way. “In the example of Rijnmond-Drechtsteden, the model yielded lower premiums without making the insurance business unsustainable,” says Rovenskaya

Climate change also imposes direct costs for banks, such as increased maintenance for infrastructure, and the transition costs of resculpting themselves for a low-carbon existence. Legislation to discourage coal use, for example, might make loans in that sector more risky. Banks therefore have a thirst for scenario data about how investments and prices may change.

They used the MESSAGEix-GLOBIOM model to simulate the effect of climate policies on land use, and energy production and distribution over decades. The banks particularly wanted projections for energy and food prices, greenhouse gas emissions, and energy mix. These projections were fed into another model to see how a bank with loans to multiple companies might fare.

McCollum found that while banks, like policymakers, wanted to look decades ahead, they also wanted near-term results and more granularity.

“They don’t just care about the total number of gigawatts of coal power versus solar or wind power for China in a certain year, but also how many solar photovoltaic modules are needed and where that production might take place,” he explains. “The project took a lot of bridging between disciplines. You’d be surprised how few large banks and other corporates do scenario-planning more than a couple of years ahead. This exercise has enlightened the wider integrated assessment modeling community about what it could offer the private sector in the future.” 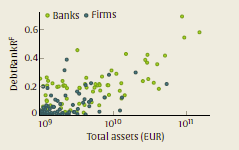 DebtRank of firms (dark green) and banks (light green) plotted against their total assets (as a proxy for firm size) in Euros.

If a climate-related catastrophe hits a bank, the financial damage can propagate between institutions. This phenomenon – systemic risk – arises because they are interlinked by networks of credit. After the financial crisis of 2007–2008, it became clear that this mesh of credit obligations meant that, if one collapsed, others could rapidly follow. Since then, regulators have taken precautions against future crises, partly by requiring banks to hold a capital cushion.

In 2016, IIASA researchers Sebastian Poledna and Stefan Thurner however demonstrated that this approach doesn’t work. Systemic risk arises because of the multiple transactions going on in the financial markets. You can only control the problem by rearranging those obligations or links.

Their solution was to levy a charge on transactions based on the level of risk that each added to the system – a systemic risk tax. Poledna modeled the effects of such a levy, demonstrating that it would drive the network into safer behavior and even eliminate the risk of collapse.

In another study, IIASA Young Scientists Summer Program participant Anton Pichler and colleagues demonstrated how to halve systemic risk without damaging individual banks by rearranging institutions’ portfolios while keeping their overall size and risk profile the same. They simulated a government bond market where financial institutions had common asset holdings. This overlap meant that, when one went bankrupt and sold its portfolio, there was a wave of collapses. After rearranging the portfolios, however, there was not a single default.

Regulators concerned with systemic risk have focused on the financial sector but systems analysis shows that it is of even greater concern in the non-financial sector. This was the surprising finding after Poledna and colleagues devoted 18 months to building a model of all the credit links within the entire Austrian business sector – 170,000 companies and banks.

In the model, they allocated every firm and bank a “DebtRank” – the degree to which its own financial distress would transmit to the network. While large banks topped the list, some medium-sized, non-financial firms were also important. One ranked as high as eighth because its default would affect almost 40% of the Austrian economy. “Overall, nonfinancial firms contributed 55% of the risk, something that regulators need to consider,” says Poledna.

Modelers are proving their worth in insurance, climate-related risks, and systemic risk but Thurner believes regulators are not moving fast enough, at least as far as the latter is concerned. 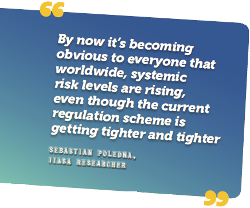 “By now it’s becoming obvious to everyone that worldwide, systemic risk levels are rising, even though the current regulation scheme is getting tighter and tighter,” he says. “Maybe after the next crisis people will really rethink how we are doing things.”

Shedding light on the key determinants of global land use projections