Applied science with a global reach

In 2018, some 195 delegates from around the world gathered in Incheon, South Korea, at a meeting convened by the Intergovernmental Panel on Climate Change (IPCC) to discuss a special report on global warming outlining the latest scientiﬁc consensus for policymakers.

IIASA researchers played a central role in the compilation of the resulting IPCC Special Report on Global Warming of 1.5ºC and actively participated in the writing of several chapters. IIASA scientists also coordinated scientific community efforts, provided original research, and took a leading role in assessing the implications of climate mitigation policies for sustainable development.

“The process was very intense,” says Keywan Riahi, IIASA Energy Program director who was one of four IIASA scientists in attendance at the Korea meeting. “Governments and scientists wanted the text to be very clear – there could be no room for misinterpretation.”

The report is considered a touchstone for the UN and a guide for national policy around the world. It not only establishes the science, but also explores possible solutions. As Riahi notes, “One country alone cannot solve these issues and that’s why we need these international processes.”

IIASA researchers regularly participate in international conversations with, among others, academics, policymakers, and the wider public. Work led by Gregor Kiesewetter, a researcher with the Air Quality and Greenhouse Gases Program, for example, underpinned an inﬂuential report published by The Lancet. 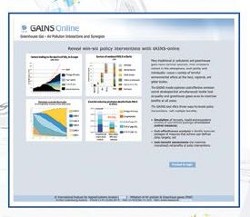 The annual Lancet Countdown report provides an update on climate change and human health. The 2018 edition incorporated insights from the IIASA Greenhouse Gas – Air Pollution Interactions and Synergies (GAINS) model that helped researchers determine which sectors of the economy contribute to the emissions of air pollutants that ultimately become particulate matter.

“What makes our contribution special is that we point to the sources that are responsible,” Kiesewetter explains. “Annually, air pollution contributes to about 3 million premature deaths worldwide, almost half a million of which is estimated to be associated with coal combustion. Our findings reveal how reducing greenhouse gas emissions by, for example, phasing out coal, can have direct benefits to human health in the near future, as well as longer-term benefits, such as reducing the risk of heat stress associated with global warming.”

In addition to the above, IIASA scientists from the Air Quality and Greenhouse Gases Program also contributed to a UN Environment Program (UNEP) report on air pollution in Asia, which again employed results from the GAINS model. The report identified the 25 most effective measures to guide governments in the region to improve the health of their citizens.

Apart from climate change and pollution, human activities such as ﬁshing and logging are also radically reducing the planet’s biodiversity, as revealed in the World Wildlife Fund’s latest Living Planet Report. Piero Visconti and David Leclère, both researchers with the Ecosystems Services and Management Program, joined scientists from 26 institutions to contribute to this document.

“The report has a strong influence on the political agenda,” Leclère says. “It also garners attention from major media outlets around the world, which can help its message reach both companies and individual citizens.”

Visconti authored a chapter exploring the metrics used to document changes in wildlife, while Leclère contributed to a chapter exploring the tradeoffs and synergies that could occur if governments pursue alternative policies to achieve climate change mitigation along with other major societal goals, such as protecting biodiversity, eradicating poverty, and ensuring food security.

According to Visconti, IIASA is uniquely positioned to provide such analyses to the global community. “I don’t think this work would have been possible without IIASA. Usually, you have energy experts, biodiversity experts, or food security experts that work in silos,” he says. “In contrast, IIASA encourages researchers to think in a different way integrating models from across disciplines, which allows us to answer questions related to multiple, intertwined societal goals.”

Beside their contributions to the inﬂuential global reports mentioned above, IIASA researchers created a comprehensive, publicly accessible database that allows people to explore scenarios to limit warming. This resource not only increases transparency, but also oﬀers a tool for scientists and policymakers to understand the trade-offs and synergies between climate change mitigation and sustainable development. To date, hundreds of researchers have accessed the database online. IIASA researchers also employed it in their contribution to the annual UNEP Emissions Gap report, which compares where the world stands in terms of reducing emissions to where it should be, and explores methods to close the gap.

Taking into account IIASA contributions to the global publications discussed above, Joeri Rogelj, a researcher with the IIASA Energy Program and an author of the IPCC report echoes Visconti’s sentiment, noting that unlike many institutions that are restricted in their specialization, IIASA connects the dots between communities, disciplines, and global societal goals.