The Paris climate talks have yielded an international agreement pledging to keep warming well below 2°C, and endeavoring to limit it to 1.5°C. IIASA hails this as a breakthrough but, as Director General and CEO Professor Dr. Pavel Kabat says: “The real work has yet to begin.” 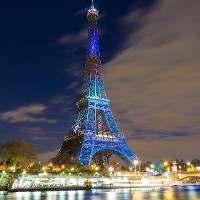 The ambitious nature of the agreement is laudable. Limiting temperature rise to 1.5 rather than 2°C compared to pre-industrial levels will help protect the countries that are the most vulnerable to climate change. Indeed, groups such as the Alliance of Small Island States and the Least-Developed Countries, have been calling for this limit for some time.

In the only study to date which has investigated a 1.5°C target, IIASA research showed that limiting temperature rise to less than 1.5°C by 2100 is feasible; but action must begin immediately. While the Paris agreement did not specify timings for the 1.5°C objective, this nonetheless gives a clear indication that there is no time for delay.

However, at present the commitments that countries are willing to make to combat climate change—the Intended Nationally Determined Contributions (INDCs)—are not sufficient to reach even the 2°C target. The United Nations Environment Programme (UNEP) Emissions Gap report, and analysis by the Modelling and Informing Low Emission Strategies Project (MILES), have shown that the INDCs in their current form would only limit global warming to approximately 3°C by 2100, with temperatures continuing to rise afterwards.

“That we need to do more is beyond doubt,” says Joeri Rogelj, IIASA researcher who played a lead role in the UNEP report, and contributed to the MILES project. “Global emissions must peak as soon as 2020 if we are to limit warming to 1.5°C by 2100.” However, it is important to note that the Paris agreement does not shy away from confronting this reality. It acknowledges that current pledges do not add up to its ambitious goals, and puts in place a system to review the actions of countries every five years, stating that each successive commitment must be at least as strong as the previous one.

“The review process is absolutely essential,” says Rogelj. “And the fact that it will occur every five years—the minimum time proposed—again demonstrates the ambitious nature of this agreement.”

Encouraging countries to ratchet up their contributions as fast as possible is vital. However, IIASA research, in conjunction with the Global Carbon Project (GCP), indicates that meeting the 1.5°C target this century will also require negative emissions—actively removing CO2 from the atmosphere. IIASA has pioneered research into negative emissions over the last decade, providing insights into the potential of these technologies. “Climate mitigation must come first and must be immediate—but even with vigorous efforts, there is a still a chance of overshooting 2°C,” says IIASA Deputy Director General Nebojsa Nakicenovic, co-chair of the GCP scientific steering committee. “Although there is no ‘silver bullet’, negative emissions could help us stabilize the climate in that case.”

Alongside the 1.5°C objective, IIASA also welcomes the inclusion of an article dealing with the losses and damage caused by global warming. IIASA research into the costs of supporting vulnerable countries and the options for setting up a global fund to absorb different levels of risk has substantially informed this debate. “Clear recognition of the need to support countries and communities that are already beyond coping capacity could be a lifeline for those at high risk, and send a strong signal for mitigating emissions,” says Reinhard Mechler, deputy director of the Risk, Policy and Vulnerability Program at IIASA.

In conclusion, IIASA applauds the ambition of the Paris agreement, along with its explicit recognition that there is still much more to be done. The IIASA view is that to achieve these aims we must integrate climate policies into every facet of our future development. While action on climate change is technically only one of the 17 UN Sustainable Development Goals (SDGs), in truth it is vital for them all. The SDGs for energy, cities, industrialization, agriculture, and forests, in particular, must all play central roles in climate change mitigation. To support such an integrated approach, IIASA is involved in a range of international research collaborations including:

A systems approach, one that can take account of our complex and interconnected world as a whole, is our best chance of making the Paris aspirations a reality.

IIASA has been involved in greenhouse gas emission projections since the beginning of climate change research in the 1970s, including research on both historical emissions as well as projections for future emissions based on multiple scenarios of economic and population growth and technological change.

IIASA has made substantial contributions to every Intergovernmental Panel on Climate Change (IPCC) report to date, and the institute also hosts two key databases for the IPCC. In addition, IIASA has been involved in the UN Environment Programme Emissions Gap reports since 2010.

Much of the institute’s research focus over the last decade has explored the need and ways for a fundamental transformation towards the decarbonization of the energy system. For example, the Global Energy Assessment, coordinated by IIASA and launched in 2012, was the first ever fully integrated energy assessment that analyzes energy challenges, opportunities and strategies, for developing, industrialized and emerging economies. It provides technical guidance for implementing measures aimed at mitigating climate change and sustainable consumption of resources.