Notable joint activities between IIASA and Finnish researchers in 2014 included the development of a research project on the Arctic and analyses of resilience of regional economies. 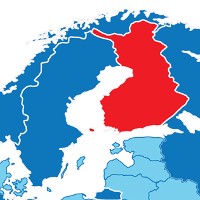 Research collaborations in 2014 were both methodological and policy-relevant. Methodological advances included developing new models of economic growth, which was applied to the study of structural change in the Finnish economy. Research for policymakers included studies into controlling air pollutants such as black carbon and aerosols, and the optimal location of biodiesel plants in Finland. Two Finnish researchers won places on IIASA's programs for young scientists in 2014. And the development of a new IIASA flagship project on the Arctic was progressed in 2014 with significant input from Finland.

World Population Program (POP) researchers examined data from the Survey of Health, Ageing, and Retirement in Europe, which tested the cognitive functions of more than 31,000 men and women over the age of 50 from 13 European countries. more

In 2014 World Population Program (POP) scientists studied predictors of economic growth in both developed and developing countries and also made an empirical study of the role of the new prospective aging measures as a predictor of income growth in Europe. more

The critical importance of technology and the resulting need for enhanced innovation efforts for climate protection was comprehensively assessed and illustrated through two major international modeling intercomparison exercises that were completed in 2014: the Energy Modeling Forum (EMF27) and the EU project AMPERE. more

Research by the Evolution and Ecology Program (EEP) on exploitation-induced evolution is assembling evidence and insights with respect to how human exploitation alters the heritable traits of targeted populations. Options are being developed on this basis for reducing unwanted alterations. more

Forest fires and adaptation in Europe is top-ranked research

As at the end of January 2015 a study by the Ecosystems Services and Management (ESM) Methods for Economic Decision-Making under Uncertainty (MEDU) research group was the most cited of all papers ever published in a top Springer journal. more

A series of improvements were introduced to the Ecosystems Services and Management (ESM) Program’s standalone fire model (SFM) which quantitatively estimates climate impacts on forest fires in Europe. more

Transitions to New Technologies (TNT) scientists are part of the German Advisory Council on Global Change (WBGU), a scientific advisory panel established by the German government. Nebojsa Nakicenovic, one of the nine members of the WBGU since its inception, was reappointed in 2014 for a second term. more

Fisheries play a key role in food security worldwide, but many aquatic food resources are fully exploited, overexploited, or depleted. This reflects the failure of management systems devised to address competing demands on the multiple services rendered by aquatic ecosystems. more

Advanced Systems Analysis (ASA) Program researchers work on conceptualizing the notion of sustainability and exploring different approaches to evaluating and quantifying it. more

World Population Program (POP) scientists contributed to a growing body of research on defining new measures of aging based on human characteristics and demonstrated how such a test could be used as a measure for aging to compare different population groups. more

The Water (WAT) Program worked on a project on Progress in Renewable Energy and Biofuels Sustainability (PREBS14) which provides the analytical basis for monitoring, assessing, and evaluating the evolution of 27 European Union member states in implementing the RES Directive, based on a detailed analysis of the progress reports submitted by each of the EU member states. more

Collaborative high-level research by Risk, Policy and Vulnerability (RPV) found that losses from extreme floods in Europe could more than double by 2050, mainly due to climate change and socioeconomic development. The research allowed the first comprehensive assessment of continental flood risk and a comparison of the different adaptation options available to Europe. more

Emergence of shared perception of futures in a foresight system

Mikko Dufva of the VTT Technical Research Centre of Finland, studied how shared perceptions about the futures emerge in a foresight system. more

Decomposition of SO2 and NOx emissions in the EU: Leakage or technology adoption?

Thanicha Ruangmas of the Department of Agricultural and Applied Economics, University of Wisconsin-Madison, USA, investigates if emission reduction in Europe is due to adoption of pollution abatement technology or to a relocation of production to other regions. more

Floor Soudijn of the University of Amsterdam/Institute, Netherlands, examined predator-prey interactions to elucidate how the fishing of cod and sprat affects the Baltic Sea ecosystem. more

Piera Patrizio of the University of Udine, Italy, developed a biogas supply chain model to identify the optimal location for installation of new biogas plants and their most ecological and profitable technology and capacity options. more

Long and dry: Testing the vulnerability to drought of London’s water supply system

Hana Nielsen of the Department of Economic History, Lund University, Sweden, aimed to identify whether the regime change (from market to centrally planned economy) in Czechoslovakia had an impact on the domestic iron and steel industry. more

The Academy of Finland

The Finnish Committee for IIASA

The Finnish Committee for IIASA

Scenarios for a changing Arctic