Collaborations with partners in Pakistan in 2014 explored air pollution, ways to increase agricultural productivity, and how Pakistan can capture the demographic dividend. 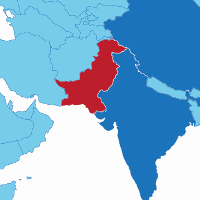 In addition to IIASA studies that provide insights into global and regional change that influence Pakistan (see list of Asian research activities below), collaborations that had a specific focus on Pakistan in 2014 included:

In addition, one Pakistani students took part in IIASA's programs for young scientists in 2014.

The Risk, Policy and Vulnerability (RPV) Program pioneered numerous studies on the fiscal resilience of national governments to extreme event losses, a concept that has become increasingly topical as climate negotiators deliberate on a global fund to support adaptation. more

The Pakistan Academy of Sciences